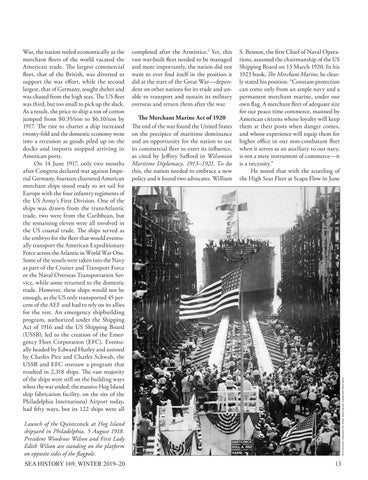 Launch of the Quistconck at Hog Island shipyard in Philadelphia, 5 August 1918. President Woodrow Wilson and First Lady Edith Wilson are standing on the platform on opposite sides of the flagpole.

completed after the Armistice.5 Yet, this vast war-built fleet needed to be managed and more importantly, the nation did not want to ever find itself in the position it did at the start of the Great War—dependent on other nations for its trade and unable to transport and sustain its military overseas and return them after the war. The Merchant Marine Act of 1920 The end of the war found the United States on the precipice of maritime dominance and an opportunity for the nation to use its commercial fleet to exert its influence, as cited by Jeffrey Safford in Wilsonian Maritime Diplomacy, 1913–1921. To do this, the nation needed to embrace a new policy and it found two advocates. William

S. Benson, the first Chief of Naval Operations, assumed the chairmanship of the US Shipping Board on 13 March 1920. In his 1923 book, The Merchant Marine, he clearly stated his position: “Constant protection can come only from an ample navy and a permanent merchant marine, under our own flag. A merchant fleet of adequate size for our peace time commerce, manned by American citizens whose loyalty will keep them at their posts when danger comes, and whose experience will equip them for higher office in our non-combatant fleet when it serves as an auxiliary to our navy, is not a mere instrument of commerce—it is a necessity.” He noted that with the scuttling of the High Seas Fleet at Scapa Flow in June

War, the nation reeled economically as the merchant fleets of the world vacated the American trade. The largest commercial fleet, that of the British, was diverted to support the war effort, while the second largest, that of Germany, sought shelter and was chased from the high seas. The US fleet was third, but too small to pick up the slack. As a result, the price to ship a ton of cotton jumped from $0.35/ton to $6.10/ton by 1917. The rate to charter a ship increased twenty-fold and the domestic economy went into a recession as goods piled up on the docks and imports stopped arriving in American ports. On 14 June 1917, only two months after Congress declared war against Imperial Germany, fourteen chartered American merchant ships stood ready to set sail for Europe with the four infantry regiments of the US Army’s First Division. One of the ships was drawn from the transAtlantic trade, two were from the Caribbean, but the remaining eleven were all involved in the US coastal trade. The ships served as the embryo for the fleet that would eventually transport the American Expeditionary Force across the Atlantic in World War One. Some of the vessels were taken into the Navy as part of the Cruiser and Transport Force or the Naval Overseas Transportation Service, while some returned to the domestic trade. However, these ships would not be enough, as the US only transported 45 percent of the AEF and had to rely on its allies for the rest. An emergency shipbuilding program, authorized under the Shipping Act of 1916 and the US Shipping Board (USSB), led to the creation of the Emergency Fleet Corporation (EFC). Eventually headed by Edward Hurley and assisted by Charles Piez and Charles Schwab, the USSB and EFC oversaw a program that resulted in 2,318 ships. The vast majority of the ships were still on the building ways when the war ended; the massive Hog Island ship fabrication facility, on the site of the Philadelphia International Airport today, had fifty ways, but its 122 ships were all