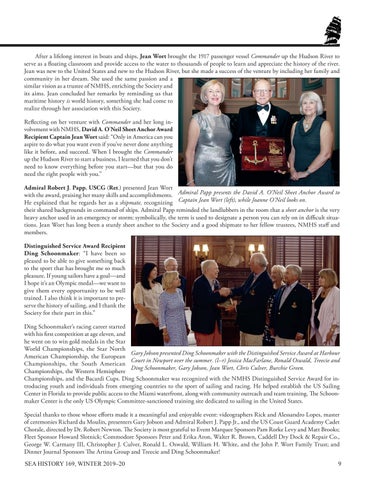 After a lifelong interest in boats and ships, Jean Wort brought the 1917 passenger vessel Commander up the Hudson River to serve as a floating classroom and provide access to the water to thousands of people to learn and appreciate the history of the river. Jean was new to the United States and new to the Hudson River, but she made a success of the venture by including her family and community in her dream. She used the same passion and a similar vision as a trustee of NMHS, enriching the Society and its aims. Jean concluded her remarks by reminding us that maritime history is world history, something she had come to realize through her association with this Society. Reflecting on her venture with Commander and her long involvement with NMHS, David A. O’Neil Sheet Anchor Award Recipient Captain Jean Wort said: “Only in America can you aspire to do what you want even if you’ve never done anything like it before, and succeed. When I brought the Commander up the Hudson River to start a business, I learned that you don’t need to know everything before you start—but that you do need the right people with you.” Admiral Robert J. Papp, USCG (Ret.) presented Jean Wort with the award, praising her many skills and accomplishments. Admiral Papp presents the David A. O’Neil Sheet Anchor Award to He explained that he regards her as a shipmate, recognizing Captain Jean Wort (left), while Joanne O’Neil looks on. their shared backgrounds in command of ships. Admiral Papp reminded the landlubbers in the room that a sheet anchor is the very heavy anchor used in an emergency or storm; symbolically, the term is used to designate a person you can rely on in difficult situations. Jean Wort has long been a sturdy sheet anchor to the Society and a good shipmate to her fellow trustees, NMHS staff and members. Distinguished Service Award Recipient Ding Schoonmaker: “I have been so pleased to be able to give something back to the sport that has brought me so much pleasure. If young sailors have a goal—and I hope it’s an Olympic medal—we want to give them every opportunity to be well trained. I also think it is important to preserve the history of sailing, and I thank the Society for their part in this.” Ding Schoonmaker’s racing career started with his first competition at age eleven, and he went on to win gold medals in the Star World Championships, the Star North Gary Jobson presented Ding Schoonmaker with the Distinguished Service Award at Harbour American Championship, the European Court in Newport over the summer. (l–r) Jessica MacFarlane, Ronald Oswald, Treecie and Championships, the South American Ding Schoonmaker, Gary Jobson, Jean Wort, Chris Culver, Burchie Green. Championships, the Western Hemisphere Championships, and the Bacardi Cups. Ding Schoonmaker was recognized with the NMHS Distinguished Service Award for introducing youth and individuals from emerging countries to the sport of sailing and racing. He helped establish the US Sailing Center in Florida to provide public access to the Miami waterfront, along with community outreach and team training. The Schoonmaker Center is the only US Olympic Committee-sanctioned training site dedicated to sailing in the United States. Special thanks to those whose efforts made it a meaningful and enjoyable event: videographers Rick and Alessandro Lopes, master of ceremonies Richard du Moulin, presenters Gary Jobson and Admiral Robert J. Papp Jr., and the US Coast Guard Academy Cadet Chorale, directed by Dr. Robert Newton. The Society is most grateful to Event Marquee Sponsors Pam Rorke Levy and Matt Brooks; Fleet Sponsor Howard Slotnick; Commodore Sponsors Peter and Erika Aron, Walter R. Brown, Caddell Dry Dock &amp; Repair Co., George W. Carmany III, Christopher J. Culver, Ronald L. Oswald, William H. White, and the John P. Wort Family Trust; and Dinner Journal Sponsors The Artina Group and Treecie and Ding Schoonmaker! SEA HISTORY 169, WINTER 2019–20 9