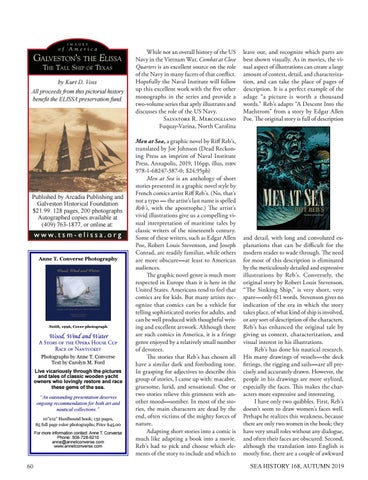 by Kurt D. Voss All proceeds from this pictorial history benefit the ELISSA preservation fund.

While not an overall history of the US Navy in the Vietnam War, Combat at Close Quarters is an excellent source on the role of the Navy in many facets of that conflict. Hopefully the Naval Institute will follow up this excellent work with the five other monographs in the series and provide a two-volume series that aptly illustrates and discusses the role of the US Navy. Salvatore R. Mercogliano Fuquay-Varina, North Carolina Men at Sea, a graphic novel by Riff Reb’s, translated by Joe Johnson (Dead Reckoning Press an imprint of Naval Institute Press, Annapolis, 2019, 116pp, illus, isbn 978-1-68247-387-0; $24.95pb) Men at Sea is an anthology of short stories presented in a graphic novel style by French comics artist Riff Reb’s. (No, that’s not a typo — the artist’s last name is spelled Reb’s, with the apostrophe.) The artist’s vivid illustrations give us a compelling visual interpretation of maritime tales by classic writers of the nineteenth century. Some of these writers, such as Edgar Allen Poe, Robert Louis Stevenson, and Joseph Conrad, are readily familiar, while others are more obscure—at least to American audiences. The graphic novel genre is much more respected in Europe than it is here in the United States. Americans tend to feel that comics are for kids. But many artists recognize that comics can be a vehicle for telling sophisticated stories for adults, and can be well produced with thoughtful writing and excellent artwork. Although there are such comics in America, it is a fringe genre enjoyed by a relatively small number of devotees. The stories that Reb’s has chosen all have a similar dark and foreboding tone. In grasping for adjectives to describe this group of stories, I came up with: macabre, gruesome, lurid, and sensational. One or two stories relieve this grimness with another mood—somber. In most of the stories, the main characters are dead by the end, often victims of the mighty forces of nature. Adapting short stories into a comic is much like adapting a book into a movie. Reb’s had to pick and choose which elements of the story to include and which to

leave out, and recognize which parts are best shown visually. As in movies, the visual aspect of illustrations can create a large amount of context, detail, and characterization, and can take the place of pages of description. It is a perfect example of the adage “a picture is worth a thousand words.” Reb’s adapts “A Descent Into the Maelstrom” from a story by Edgar Allen Poe. The original story is full of description

and detail, with long and convoluted explanations that can be difficult for the modern reader to wade through. The need for most of this description is eliminated by the meticulously detailed and expressive illustrations by Reb’s. Conversely, the original story by Robert Louis Stevenson, “The Sinking Ship,” is very short, very spare—only 611 words. Stevenson gives no indication of the era in which the story takes place, of what kind of ship is involved, or any sort of description of the characters. Reb’s has enhanced the original tale by giving us context, characterization, and visual interest in his illustrations. Reb’s has done his nautical research. His many drawings of vessels—the deck fittings, the rigging and sails—are all precisely and accurately drawn. However, the people in his drawings are more stylized, especially the faces. This makes the characters more expressive and interesting. I have only two quibbles. First, Reb’s doesn’t seem to draw women’s faces well. Perhaps he realizes this weakness, because there are only two women in the book; they have very small roles without any dialogue, and often their faces are obscured. Second, although the translation into English is mostly fine, there are a couple of awkward SEA HISTORY 168, AUTUMN 2019