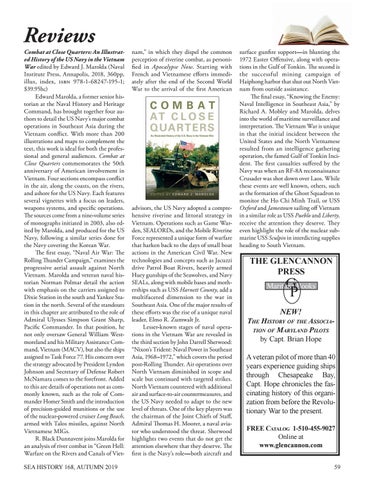 Combat at Close Quarters: An Illustrated History of the US Navy in the Vietnam War edited by Edward J. Marolda (Naval Institute Press, Annapolis, 2018, 360pp, illus, index, isbn 978-1-68247-195-1; $39.95hc) Edward Marolda, a former senior historian at the Naval History and Heritage Command, has brought together four authors to detail the US Navy’s major combat operations in Southeast Asia during the Vietnam conflict. With more than 200 illustrations and maps to complement the text, this work is ideal for both the professional and general audiences. Combat at Close Quarters commemorates the 50th anniversary of American involvement in Vietnam. Four sections encompass conflict in the air, along the coasts, on the rivers, and ashore for the US Navy. Each features several vignettes with a focus on leaders, weapons systems, and specific operations. The sources come from a nine-volume series of monographs initiated in 2003, also edited by Marolda, and produced for the US Navy, following a similar series done for the Navy covering the Korean War. The first essay, “Naval Air War: The Rolling Thunder Campaign,” examines the progressive aerial assault against North Vietnam. Marolda and veteran naval historian Norman Polmar detail the action with emphasis on the carriers assigned to Dixie Station in the south and Yankee Station in the north. Several of the standouts in this chapter are attributed to the role of Admiral Ulysses Simpson Grant Sharp, Pacific Commander. In that position, he not only oversaw General William Westmoreland and his Military Assistance Command, Vietnam (MACV), but also the ships assigned to Task Force 77. His concern over the strategy advocated by President Lyndon Johnson and Secretary of Defense Robert McNamara comes to the forefront. Added to this are details of operations not as commonly known, such as the role of Commander Homer Smith and the introduction of precision-guided munitions or the use of the nuclear-powered cruiser Long Beach, armed with Talos missiles, against North Vietnamese MIGs. R. Black Dunnavent joins Marolda for an analysis of river combat in “Green Hell: Warfare on the Rivers and Canals of Viet-

nam,” in which they dispel the common perception of riverine combat, as personified in Apocalypse Now. Starting with French and Vietnamese efforts immediately after the end of the Second World War to the arrival of the first American

surface gunfire support—in blunting the 1972 Easter Offensive, along with operations in the Gulf of Tonkin. The second is the successful mining campaign of Haiphong harbor that shut out North Vietnam from outside assistance. The final essay, “Knowing the Enemy: Naval Intelligence in Southeast Asia,” by Richard A. Mobley and Marolda, delves into the world of maritime surveillance and interpretation. The Vietnam War is unique in that the initial incident between the United States and the North Vietnamese resulted from an intelligence gathering operation, the famed Gulf of Tonkin Incident. The first casualties suffered by the Navy was when an RF-8A reconnaissance The Glencannon PressCrusader was shot down over Laos. While these events are well known, others, such 4 col. inches (2.25 x 4.5 inches) as the formation of the Ghost Squadron to Prefer right hand page,monitor bottom theright. Ho Chi Minh Trail, or USS advisors, the US Navy adopted a compre- Oxford and Jamestown sailing off Vietnam hensive riverine and littoral strategy in in a similar role as USS Pueblo and Liberty, Vietnam. Operations such as Game War- receive the attention they deserve. They den, SEALORDs, and the Mobile Riverine even highlight the role of the nuclear subForce represented a unique form of warfare marine USS Sculpin in interdicting supplies that harken back to the days of small boat heading to South Vietnam. actions in the American Civil War. New technologies and concepts such as Jacuzzi THE GLENCANNON drive Patrol Boat Rivers, heavily armed PRESS Huey gunships of the Seawolves, and Navy SEALs, along with mobile bases and mothMaritime Books erships such as USS Harnett County, add a multifaceted dimension to the war in Southeast Asia. One of the major results of these efforts was the rise of a unique naval NEW! leader, Elmo R. Zumwalt Jr. The hisTory of The AssociALesser-known stages of naval operaTion of MArylAnd PiloTs tions in the Vietnam War are revealed in by Capt. Brian Hope the third section by John Darrell Sherwood: “Nixon’s Trident: Naval Power in Southeast Asia, 1968–1972,” which covers the period A veteran pilot of more than 40 post-Rolling Thunder. Air operations over years experience guiding ships North Vietnam diminished in scope and through Chesapeake Bay, scale but continued with targeted strikes. Capt. Hope chronicles the fasNorth Vietnam countered with additional cinating history of this organiair and surface-to-air countermeasures, and the US Navy needed to adapt to the new zation from before the Revolulevel of threats. One of the key players was tionary War to the present. the chairman of the Joint Chiefs of Staff, Admiral Thomas H. Moorer, a naval aviaFREE Catalog 1-510-455-9027 tor who understood the threat. Sherwood Online at highlights two events that do not get the www.glencannon.com attention elsewhere that they deserve. The first is the Navy’s role—both aircraft and