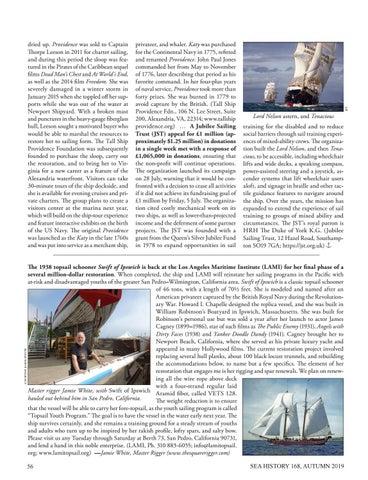 privateer, and whaler. Katy was purchased for the Continental Navy in 1775, refitted and renamed Providence. John Paul Jones commanded her from May to November of 1776, later describing that period as his favorite command. In her four-plus years of naval service, Providence took more than forty prizes. She was burned in 1779 to avoid capture by the British. (Tall Ship Providence Fdn., 106 N. Lee Street, Suite 200, Alexandria, VA, 22314; www.tallship providence.org) … A Jubilee Sailing Trust (JST) appeal for £1 million (approximately $1.25 million) in donations in a single week met with a response of £1,065,000 in donations, ensuring that the non-profit will continue operations. The organization launched its campaign on 28 July, warning that it would be confronted with a decision to cease all activities if it did not achieve its fundraising goal of £1 million by Friday, 5 July. The organization cited costly mechanical work on its two ships, as well as lower-than-projected income and the deferment of some partner projects. The JST was founded with a grant from the Queen’s Silver Jubilee Fund in 1978 to expand opportunities in sail

dried up. Providence was sold to Captain Thorpe Leeson in 2011 for charter sailing, and during this period the sloop was featured in the Pirates of the Caribbean sequel films Dead Man’s Chest and At World’s End, as well as the 2014 film Freedom. She was severely damaged in a winter storm in January 2015 when she toppled off her supports while she was out of the water at Newport Shipyard. With a broken mast and punctures in the heavy-gauge fiberglass hull, Leeson sought a motivated buyer who would be able to marshal the resources to restore her to sailing form. The Tall Ship Providence Foundation was subsequently founded to purchase the sloop, carry out the restoration, and to bring her to Virginia for a new career as a feature of the Alexandria waterfront. Visitors can take 30-minute tours of the ship dockside, and she is available for evening cruises and private charters. The group plans to create a visitors center at the marina next year, which will build on the ship-tour experience and feature interactive exhibits on the birth of the US Navy. The original Providence was launched as the Katy in the late 1760s and was put into service as a merchant ship,

Lord Nelson astern, and Tenacious training for the disabled and to reduce social barriers through sail training experiences of mixed-ability crews. The organization built the Lord Nelson, and then Tenacious, to be accessible, including wheelchair lifts and wide decks, a speaking compass, power-assisted steering and a joystick, ascender systems that lift wheelchair users aloft, and signage in braille and other tactile guidance features to navigate around the ship. Over the years, the mission has expanded to extend the experience of sail training to groups of mixed ability and circumstances. The JST’s royal patron is HRH The Duke of York K.G. (Jubilee Sailing Trust, 12 Hazel Road, Southampton SO19 7GA; https://jst.org.uk)

The 1938 topsail schooner Swift of Ipswich is back at the Los Angeles Maritime Institute (LAMI) for her final phase of a several million-dollar restoration. When completed, the ship and LAMI will reinstate her sailing programs in the Pacific with at-risk and disadvantaged youths of the greater San Pedro–Wilmington, California area. Swift of Ipswich is a classic topsail schooner of 46 tons, with a length of 70½ feet. She is modeled and named after an American privateer captured by the British Royal Navy during the Revolutionary War. Howard I. Chapelle designed the replica vessel, and she was built in William Robinson’s Boatyard in Ipswich, Massachusetts. She was built for Robinson’s personal use but was sold a year after her launch to actor James Cagney (1899–1986), star of such films as The Public Enemy (1931), Angels with Dirty Faces (1938) and Yankee Doodle Dandy (1941). Cagney brought her to Newport Beach, California, where she served as his private luxury yacht and appeared in many Hollywood films. The current restoration project involved replacing several hull planks, about 100 black locust trunnels, and rebuilding the accommodations below, to name but a few specifics. The element of her restoration that engages me is her rigging and spar renewals. We plan on renewing all the wire rope above deck with a four-strand regular laid Master rigger Jamie White, with Swift of Ipswich Aramid fiber, called VETS 128. hauled out behind him in San Pedro, California. The weight reduction is to ensure that the vessel will be able to carry her fore-topsail, as the youth sailing program is called “Topsail Youth Program.” The goal is to have the vessel in the water early next year. The ship survives certainly, and she remains a training ground for a steady stream of youths and adults who turn up to be inspired by her rakish profile, lofty spars, and salty bow. Please visit us any Tuesday through Saturday at Berth 73, San Pedro, California 90731, and lend a hand in this noble enterprise. (LAMI, Ph. 310 883-6055; info@lamitopsail. org; www.lamitopsail.org) —Jamie White, Master Rigger (www.thesquarerigger.com)