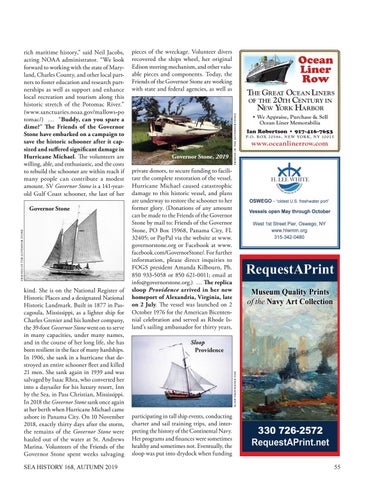 friends of the governor stone

kind. She is on the National Register of Historic Places and a designated National Historic Landmark. Built in 1877 in Pascagoula, Mississippi, as a lighter ship for Charles Grenier and his lumber company, the 39-foot Governor Stone went on to serve in many capacities, under many names, and in the course of her long life, she has been resilient in the face of many hardships. In 1906, she sank in a hurricane that destroyed an entire schooner fleet and killed 21 men. She sank again in 1939 and was salvaged by Isaac Rhea, who converted her into a daysailer for his luxury resort, Inn by the Sea, in Pass Christian, Mississippi. In 2018 the Governor Stone sank once again at her berth when Hurricane Michael came ashore in Panama City. On 10 November 2018, exactly thirty days after the storm, the remains of the Governor Stone were hauled out of the water at St. Andrews Marina. Volunteers of the Friends of the Governor Stone spent weeks salvaging

friends of the governor stone

pieces of the wreckage. Volunteer divers recovered the ships wheel, her original Edison steering mechanism, and other valuable pieces and components. Today, the Friends of the Governor Stone are working with state and federal agencies, as well as

private donors, to secure funding to facilitate the complete restoration of the vessel. Hurricane Michael caused catastrophic damage to this historic vessel, and plans are underway to restore the schooner to her former glory. (Donations of any amount can be made to the Friends of the Governor Stone by mail to: Friends of the Governor Stone, PO Box 15968, Panama City, FL 32405; or PayPal via the website at www. governorstone.org or Facebook at www. facebook.com/GovernorStone/. For further information, please direct inquiries to FOGS president Amanda Kilbourn, Ph. 850 933-5058 or 850 621-0011; email at info@governorstone.org.) … The replica sloop Providence arrived in her new homeport of Alexandria, Virginia, late on 2 July. The vessel was launched on 2 October 1976 for the American Bicentennial celebration and served as Rhode Island’s sailing ambassador for thirty years, Sloop Providence

rich maritime history,” said Neil Jacobs, acting NOAA administrator. “We look forward to working with the state of Maryland, Charles County, and other local partners to foster education and research partnerships as well as support and enhance local recreation and tourism along this historic stretch of the Potomac River.” (www.sanctuaries.noaa.gov/mallows-po tomac/) … “Buddy, can you spare a dime?” The Friends of the Governor Stone have embarked on a campaign to save the historic schooner after it capsized and suffered significant damage in Hurricane Michael. The volunteers are willing, able, and enthusiastic, and the costs to rebuild the schooner are within reach if many people can contribute a modest amount. SV Governor Stone is a 141-yearold Gulf Coast schooner, the last of her

participating in tall ship events, conducting charter and sail training trips, and interpreting the history of the Continental Navy. Her programs and finances were sometimes healthy and sometimes not. Eventually, the sloop was put into drydock when funding