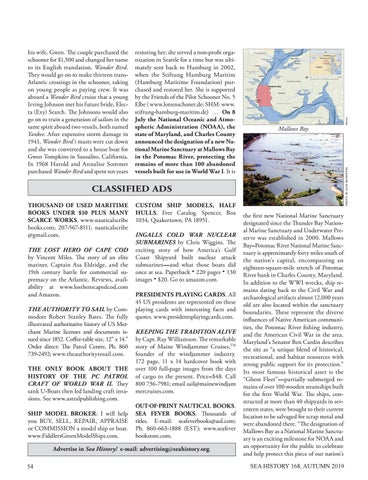 CLASSIFIED ADS THOUSAND OF USED MARITIME BOOKS UNDER $10 PLUS MANY SCARCE WORKS. www.nauticalscribe books.com; 207-567-8111; nauticalscribe @gmail.com. THE LOST HERO OF CAPE COD by Vincent Miles. The story of an elite mariner, Captain Asa Eldridge, and the 19th century battle for commercial supremacy on the Atlantic. Reviews, availability at www.lostherocapedcod.com and Amazon. THE AUTHORITY TO SAIL by Commodore Robert Stanley Bates. The fully illustrated authoritative history of US Merchant Marine licenses and documents issued since 1852. Coffee-table size, 12” x 14.” Order direct: The Parcel Centre, Ph. 860 739-2492; www.theauthoritytosail.com. THE ONLY BOOK ABOUT THE HISTORY OF THE PC PATROL CRAFT OF WORLD WAR II. They sank U-Boats then led landing craft invasions. See www.astralpublishing.com. SHIP MODEL BROKER: I will help you BUY, SELL, REPAIR, APPRAISE or COMMISSION a model ship or boat. www.FiddlersGreenModelShips.com.

restoring her; she served a non-profit organization in Seattle for a time but was ultimately sent back to Hamburg in 2002, when the Stiftung Hamburg Maritim (Hamburg Maritime Foundation) purchased and restored her. She is supported by the Friends of the Pilot Schooner No. 5 Elbe ( www.lotsenschoner.de; SHM: www. stiftung-hamburg-maritim.de) … On 8 July the National Oceanic and Atmospheric Administration (NOAA), the state of Maryland, and Charles County announced the designation of a new National Marine Sanctuary at Mallows Bay in the Potomac River, protecting the remains of more than 100 abandoned vessels built for use in World War I. It is

his wife, Gwen. The couple purchased the schooner for $1,500 and changed her name to its English translation, Wander Bird. They would go on to make thirteen transAtlantic crossings in the schooner, taking on young people as paying crew. It was aboard a Wander Bird cruise that a young Irving Johnson met his future bride, Electa (Exy) Search. The Johnsons would also go on to train a generation of sailors in the same spirit aboard two vessels, both named Yankee. After expensive storm damage in 1941, Wander Bird’s masts were cut down and she was converted to a house boat for Gwen Tompkins in Sausalito, California. In 1968 Harold and Annalise Sommer purchased Wander Bird and spent ten years

the first new National Marine Sanctuary designated since the Thunder Bay National Marine Sanctuary and Underwater Preserve was established in 2000. Mallows Bay–Potomac River National Marine Sanctuary is approximately forty miles south of the nation’s capital, encompassing an eighteen-square-mile stretch of Potomac River bank in Charles County, Maryland. In addition to the WWI wrecks, ship remains dating back to the Civil War and archaeological artifacts almost 12,000 years old are also located within the sanctuary boundaries. These represent the diverse influences of Native American communities, the Potomac River fishing industry, and the American Civil War in the area. Maryland’s Senator Ben Cardin describes the site as “a unique blend of historical, recreational, and habitat resources with strong public support for its protection.” Its most famous historical asset is the “Ghost Fleet”—partially submerged remains of over 100 wooden steamships built for the first World War. The ships, constructed at more than 40 shipyards in seventeen states, were brought to their current location to be salvaged for scrap metal and were abandoned there. “The designation of Mallows Bay as a National Marine Sanctuary is an exciting milestone for NOAA and an opportunity for the public to celebrate and help protect this piece of our nation’s SEA HISTORY 168, AUTUMN 2019