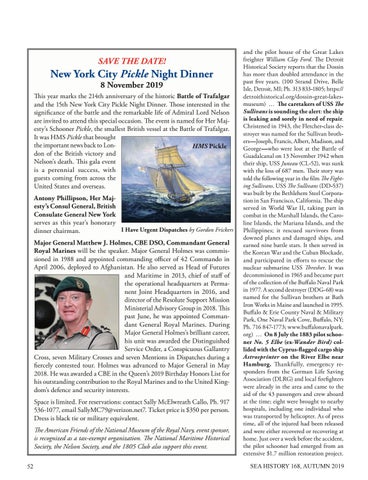 This year marks the 214th anniversary of the historic Battle of Trafalgar and the 15th New York City Pickle Night Dinner. Those interested in the significance of the battle and the remarkable life of Admiral Lord Nelson are invited to attend this special occasion. The event is named for Her Majesty’s Schooner Pickle, the smallest British vessel at the Battle of Trafalgar. It was HMS Pickle that brought the important news back to LonHMS Pickle don of the British victory and Nelson’s death. This gala event is a perennial success, with guests coming from across the United States and overseas. Antony Phillipson, Her Majesty’s Consul General, British Consulate General New York serves as this year’s honorary I Have Urgent Dispatches by Gordon Frickers dinner chairman. Major General Matthew J. Holmes, CBE DSO, Commandant General Royal Marines will be the speaker. Major General Holmes was commissioned in 1988 and appointed commanding officer of 42 Commando in April 2006, deployed to Afghanistan. He also served as Head of Futures and Maritime in 2013, chief of staff of the operational headquarters at Permanent Joint Headquarters in 2016, and director of the Resolute Support Mission Ministerial Advisory Group in 2018. This past June, he was appointed Commandant General Royal Marines. During Major General Holmes’s brilliant career, his unit was awarded the Distinguished Service Order, a Conspicuous Gallantry Cross, seven Military Crosses and seven Mentions in Dispatches during a fiercely contested tour. Holmes was advanced to Major General in May 2018. He was awarded a CBE in the Queen’s 2019 Birthday Honors List for his outstanding contribution to the Royal Marines and to the United Kingdom’s defence and security interests. Space is limited. For reservations: contact Sally McElwreath Callo, Ph. 917 536-1077, email SallyMC79@verizon.net7. Ticket price is $350 per person. Dress is black tie or military equivalent. The American Friends of the National Museum of the Royal Navy, event sponsor, is recognized as a tax-exempt organization. The National Maritime Historical Society, the Nelson Society, and the 1805 Club also support this event. 52

and the pilot house of the Great Lakes freighter William Clay Ford. The Detroit Historical Society reports that the Dossin has more than doubled attendance in the past five years. (100 Strand Drive, Belle Isle, Detroit, MI; Ph. 313 833-1805; https:// detroithistorical.org/dossin-great-lakesmuseum) … The caretakers of USS The Sullivans is sounding the alert: the ship is leaking and sorely in need of repair. Christened in 1943, the Fletcher-class destroyer was named for the Sullivan brothers—Joseph, Francis, Albert, Madison, and George—who were lost at the Battle of Guadalcanal on 13 November 1942 when their ship, USS Juneau (CL-52), was sunk with the loss of 687 men. Their story was told the following year in the film The Fighting Sullivans. USS The Sullivans (DD-537) was built by the Bethlehem Steel Corporation in San Francisco, California. The ship served in World War II, taking part in combat in the Marshall Islands, the Caroline Islands, the Mariana Islands, and the Philippines; it rescued survivors from downed planes and damaged ships, and earned nine battle stars. It then served in the Korean War and the Cuban Blockade, and participated in efforts to rescue the nuclear submarine USS Thresher. It was decommissioned in 1965 and became part of the collection of the Buffalo Naval Park in 1977. A second destroyer (DDG-68) was named for the Sullivan brothers at Bath Iron Works in Maine and launched in 1995. Buffalo &amp; Erie County Naval &amp; Military Park, One Naval Park Cove, Buffalo, NY; Ph. 716 847-1773; www.buffalonavalpark. org) … On 8 July the 1883 pilot schooner No. 5 Elbe (ex-Wander Bird) collided with the Cyprus-flagged cargo ship Astrosprinter on the River Elbe near Hamburg. Thankfully, emergency responders from the German Life Saving Association (DLRG) and local firefighters were already in the area and came to the aid of the 43 passengers and crew aboard at the time; eight were brought to nearby hospitals, including one individual who was transported by helicopter. As of press time, all of the injured had been released and were either recovered or recovering at home. Just over a week before the accident, the pilot schooner had emerged from an extensive $1.7 million restoration project. SEA HISTORY 168, AUTUMN 2019