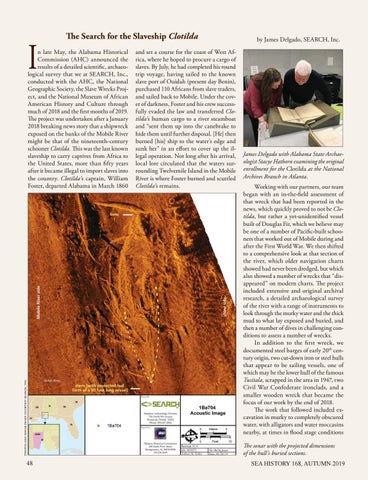 The Search for the Slaveship Clotilda

n late May, the Alabama Historical Commission (AHC) announced the results of a detailed scientific, archaeological survey that we at SEARCH, Inc., conducted with the AHC, the National Geographic Society, the Slave Wrecks Project, and the National Museum of African American History and Culture through much of 2018 and the first months of 2019. The project was undertaken after a January 2018 breaking news story that a shipwreck exposed on the banks of the Mobile River might be that of the nineteenth-century schooner Clotilda. This was the last known slaveship to carry captives from Africa to the United States, more than fifty years after it became illegal to import slaves into the country. Clotilda’s captain, William Foster, departed Alabama in March 1860

and set a course for the coast of West Africa, where he hoped to procure a cargo of slaves. By July, he had completed his round trip voyage, having sailed to the known slave port of Ouidah (present day Benin), purchased 110 Africans from slave traders, and sailed back to Mobile. Under the cover of darkness, Foster and his crew successfully evaded the law and transferred Clotilda’s human cargo to a river steamboat and “sent them up into the canebrake to hide them until further disposal. [He] then burned [his] ship to the water’s edge and sunk her” in an effort to cover up the illegal operation. Not long after his arrival, local lore circulated that the waters surrounding Twelvemile Island in the Mobile River is where Foster burned and scuttled Clotilda’s remains.

James Delgado with Alabama State Archaeologist Stacye Hathorn examining the original enrollment for the Clotilda at the National Archives Branch in Atlanta. Working with our partners, our team began with an in-the-field assessment of that wreck that had been reported in the news, which quickly proved to not be Clotilda, but rather a yet-unidentified vessel built of Douglas Fir, which we believe may be one of a number of Pacific-built schooners that worked out of Mobile during and after the First World War. We then shifted to a comprehensive look at that section of the river, which older navigation charts showed had never been dredged, but which also showed a number of wrecks that “disappeared” on modern charts. The project included extensive and original archival research, a detailed archaeological survey of the river with a range of instruments to look through the murky water and the thick mud to what lay exposed and buried, and then a number of dives in challenging conditions to assess a number of wrecks. In addition to the first wreck, we documented steel barges of early 20th century origin, two cut-down iron or steel hulls that appear to be sailing vessels, one of which may be the lower hull of the famous Tusitala, scrapped in the area in 1947, two Civil War Confederate ironclads, and a smaller wooden wreck that became the focus of our work by the end of 2018. The work that followed included excavation in murky to completely obscured water, with alligators and water moccasins nearby, at times in flood stage conditions The sonar with the projected dimensions of the hull’s buried sections. SEA HISTORY HISTORY 168, 168, AUTUMN AUTUMN 2019 2019 SEA