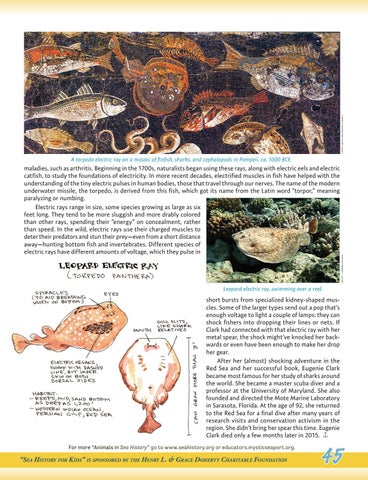 A torpedo electric ray on a mosaic of finfish, sharks, and cephalopods in Pompeii, ca. 1000 BCE.

maladies, such as arthritis. Beginning in the 1700s, naturalists began using these rays, along with electric eels and electric catfish, to study the foundations of electricity. In more recent decades, electrified muscles in fish have helped with the understanding of the tiny electric pulses in human bodies, those that travel through our nerves. The name of the modern underwater missile, the torpedo, is derived from this fish, which got its name from the Latin word “torpor,” meaning paralyzing or numbing. Electric rays range in size, some species growing as large as six feet long. They tend to be more sluggish and more drably colored than other rays, spending their “energy” on concealment, rather than speed. In the wild, electric rays use their charged muscles to deter their predators and stun their prey—even from a short distance away—hunting bottom fish and invertebrates. Different species of electric rays have different amounts of voltage, which they pulse in

short bursts from specialized kidney-shaped muscles. Some of the larger types send out a pop that’s enough voltage to light a couple of lamps: they can shock fishers into dropping their lines or nets. If Clark had connected with that electric ray with her metal spear, the shock might’ve knocked her backwards or even have been enough to make her drop her gear. After her (almost) shocking adventure in the Red Sea and her successful book, Eugenie Clark became most famous for her study of sharks around the world. She became a master scuba diver and a professor at the University of Maryland. She also founded and directed the Mote Marine Laboratory in Sarasota, Florida. At the age of 92, she returned to the Red Sea for a final dive after many years of research visits and conservation activism in the region. She didn’t bring her spear this time. Eugenie Clark died only a few months later in 2015. For more “Animals in Sea History” go to www.seahistory.org or educators.mysticseaport.org.