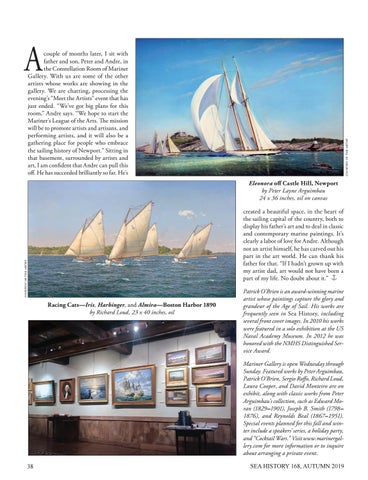 couple of months later, I sit with father and son, Peter and Andre, in the Constellation Room of Mariner Gallery. With us are some of the other artists whose works are showing in the gallery. We are chatting, processing the evening’s “Meet the Artists” event that has just ended. “We’ve got big plans for this room,” Andre says. “We hope to start the Mariner’s League of the Arts. The mission will be to promote artists and artisans, and performing artists, and it will also be a gathering place for people who embrace the sailing history of Newport.” Sitting in that basement, surrounded by artists and art, I am confident that Andre can pull this off. He has succeeded brilliantly so far. He’s Eleonora off Castle Hill, Newport by Peter Layne Arguimbau 24 x 36 inches, oil on canvas

created a beautiful space, in the heart of the sailing capital of the country, both to display his father’s art and to deal in classic and contemporary marine paintings. It’s clearly a labor of love for Andre. Although not an artist himself, he has carved out his part in the art world. He can thank his father for that. “If I hadn’t grown up with my artist dad, art would not have been a part of my life. No doubt about it.”

Patrick O’Brien is an award-winning marine artist whose paintings capture the glory and grandeur of the Age of Sail. His works are frequently seen in Sea History, including several front cover images. In 2010 his works were featured in a solo exhibition at the US Naval Academy Museum. In 2012 he was honored with the NMHS Distinguished Service Award. Mariner Gallery is open Wednesday through Sunday. Featured works by Peter Arguimbau, Patrick O’Brien, Sergio Roffo, Richard Loud, Laura Cooper, and David Monteiro are on exhibit, along with classic works from Peter Arguimbau’s collection, such as Edward Moran (1829–1901), Joseph B. Smith (1798– 1876), and Reynolds Beal (1867–1951). Special events planned for this fall and winter include a speakers’ series, a holiday party, and “Cocktail Wars.” Visit www.marinergallery.com for more information or to inquire about arranging a private event.