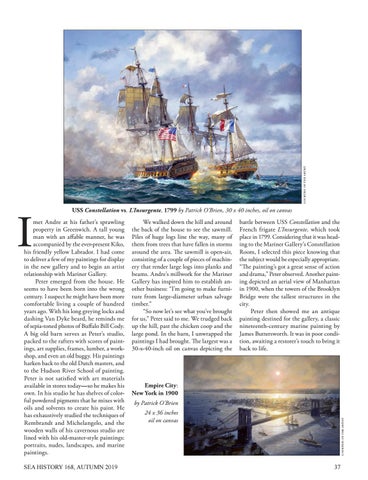 met Andre at his father’s sprawling property in Greenwich. A tall young man with an affable manner, he was accompanied by the ever-present Kiko, his friendly yellow Labrador. I had come to deliver a few of my paintings for display in the new gallery and to begin an artist relationship with Mariner Gallery. Peter emerged from the house. He seems to have been born into the wrong century. I suspect he might have been more comfortable living a couple of hundred years ago. With his long greying locks and dashing Van Dyke beard, he reminds me of sepia-toned photos of Buffalo Bill Cody. A big old barn serves as Peter’s studio, packed to the rafters with scores of paintings, art supplies, frames, lumber, a workshop, and even an old buggy. His paintings harken back to the old Dutch masters, and to the Hudson River School of painting. Peter is not satisfied with art materials available in stores today—so he makes his own. In his studio he has shelves of colorful powdered pigments that he mixes with oils and solvents to create his paint. He has exhaustively studied the techniques of Rembrandt and Michelangelo, and the wooden walls of his cavernous studio are lined with his old-master-style paintings: portraits, nudes, landscapes, and marine paintings.

We walked down the hill and around the back of the house to see the sawmill. Piles of huge logs line the way, many of them from trees that have fallen in storms around the area. The sawmill is open-air, consisting of a couple of pieces of machinery that render large logs into planks and beams. Andre’s millwork for the Mariner Gallery has inspired him to establish another business: “I’m going to make furniture from large-diameter urban salvage timber.” “So now let’s see what you’ve brought for us,” Peter said to me. We trudged back up the hill, past the chicken coop and the large pond. In the barn, I unwrapped the paintings I had brought. The largest was a 30-x-40-inch oil on canvas depicting the

battle between USS Constellation and the French frigate L’Insurgente, which took place in 1799. Considering that it was heading to the Mariner Gallery’s Constellation Room, I selected this piece knowing that the subject would be especially appropriate. “The painting’s got a great sense of action and drama,” Peter observed. Another painting depicted an aerial view of Manhattan in 1900, when the towers of the Brooklyn Bridge were the tallest structures in the city. Peter then showed me an antique painting destined for the gallery, a classic nineteenth-century marine painting by James Buttersworth. It was in poor condition, awaiting a restorer’s touch to bring it back to life.