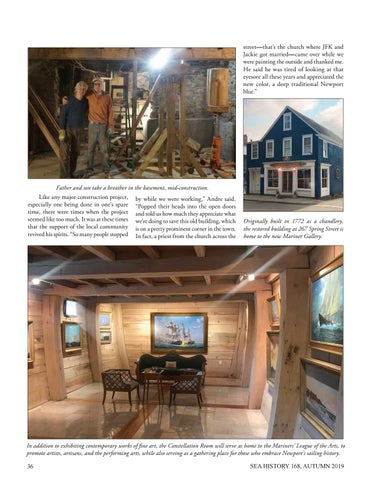 street—that’s the church where JFK and Jackie got married—came over while we were painting the outside and thanked me. He said he was tired of looking at that eyesore all these years and appreciated the new color, a deep traditional Newport blue.”

Father and son take a breather in the basement, mid-construction. Like any major construction project, by while we were working,” Andre said. especially one being done in one’s spare “Popped their heads into the open doors time, there were times when the project and told us how much they appreciate what seemed like too much. It was at these times we’re doing to save this old building, which that the support of the local community is on a pretty prominent corner in the town. revived his spirits. “So many people stopped In fact, a priest from the church across the

Originally built in 1772 as a chandlery, the restored building at 267 Spring Street is home to the new Mariner Gallery.

In addition to exhibiting contemporary works of fine art, the Constellation Room will serve as home to the Mariners’ League of the Arts, to promote artists, artisans, and the performing arts, while also serving as a gathering place for those who embrace Newport’s sailing history. 36