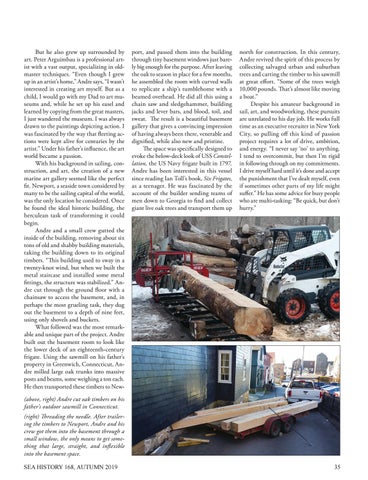 But he also grew up surrounded by art. Peter Arguimbau is a professional artist with a vast output, specializing in oldmaster techniques. “Even though I grew up in an artist’s home,” Andre says, “I wasn’t interested in creating art myself. But as a child, I would go with my Dad to art museums and, while he set up his easel and learned by copying from the great masters, I just wandered the museum. I was always drawn to the paintings depicting action. I was fascinated by the way that fleeting actions were kept alive for centuries by the artist.” Under his father’s influence, the art world became a passion. With his background in sailing, construction, and art, the creation of a new marine art gallery seemed like the perfect fit. Newport, a seaside town considered by many to be the sailing capital of the world, was the only location he considered. Once he found the ideal historic building, the herculean task of transforming it could begin. Andre and a small crew gutted the inside of the building, removing about six tons of old and shabby building materials, taking the building down to its original timbers. “This building used to sway in a twenty-knot wind, but when we built the metal staircase and installed some metal fittings, the structure was stabilized.” Andre cut through the ground floor with a chainsaw to access the basement, and, in perhaps the most grueling task, they dug out the basement to a depth of nine feet, using only shovels and buckets. What followed was the most remarkable and unique part of the project. Andre built out the basement room to look like the lower deck of an eighteenth-century frigate. Using the sawmill on his father’s property in Greenwich, Connecticut, Andre milled large oak trunks into massive posts and beams, some weighing a ton each. He then transported these timbers to New-

port, and passed them into the building through tiny basement windows just barely big enough for the purpose. After leaving the oak to season in place for a few months, he assembled the room with curved walls to replicate a ship’s tumblehome with a beamed overhead. He did all this using a chain saw and sledgehammer, building jacks and lever bars, and blood, toil, and sweat. The result is a beautiful basement gallery that gives a convincing impression of having always been there, venerable and dignified, while also new and pristine. The space was specifically designed to evoke the below-deck look of USS Constellation, the US Navy frigate built in 1797. Andre has been interested in this vessel since reading Ian Toll’s book, Six Frigates, as a teenager. He was fascinated by the account of the builder sending teams of men down to Georgia to find and collect giant live oak trees and transport them up

north for construction. In this century, Andre revived the spirit of this process by collecting salvaged urban and suburban trees and carting the timber to his sawmill at great effort. “Some of the trees weigh 10,000 pounds. That’s almost like moving a boat.” Despite his amateur background in sail, art, and woodworking, these pursuits are unrelated to his day job. He works full time as an executive recruiter in New York City, so pulling off this kind of passion project requires a lot of drive, ambition, and energy. “I never say ‘no’ to anything. I tend to overcommit, but then I’m rigid in following through on my commitments. I drive myself hard until it’s done and accept the punishment that I’ve dealt myself, even if sometimes other parts of my life might suffer.” He has some advice for busy people who are multi-tasking: “Be quick, but don’t hurry.”

(above, right) Andre cut oak timbers on his father’s outdoor sawmill in Connecticut. (right) Threading the needle. After trailering the timbers to Newport, Andre and his crew got them into the basement through a small window, the only means to get something that large, straight, and inflexible into the basement space. SEA HISTORY 168, AUTUMN 2019 35