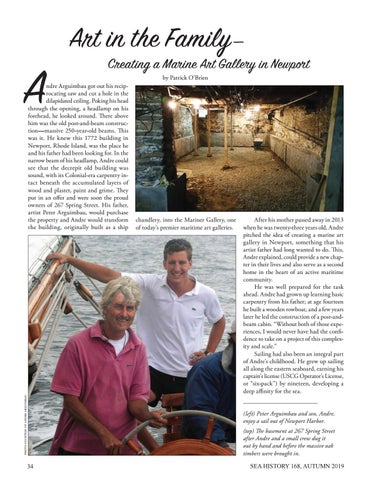 Art in the Family —

ndre Arguimbau got out his reciprocating saw and cut a hole in the dilapidated ceiling. Poking his head through the opening, a headlamp on his forehead, he looked around. There above him was the old post-and-beam construction—massive 250-year-old beams. This was it. He knew this 1772 building in Newport, Rhode Island, was the place he and his father had been looking for. In the narrow beam of his headlamp, Andre could see that the decrepit old building was sound, with its Colonial-era carpentry intact beneath the accumulated layers of wood and plaster, paint and grime. They put in an offer and were soon the proud owners of 267 Spring Street. His father, artist Peter Arguimbau, would purchase the property and Andre would transform the building, originally built as a ship

chandlery, into the Mariner Gallery, one of today’s premier maritime art galleries.

After his mother passed away in 2013 when he was twenty-three years old, Andre pitched the idea of creating a marine art gallery in Newport, something that his artist father had long wanted to do. This, Andre explained, could provide a new chapter in their lives and also serve as a second home in the heart of an active maritime community. He was well prepared for the task ahead. Andre had grown up learning basic carpentry from his father; at age fourteen he built a wooden rowboat, and a few years later he led the construction of a post-andbeam cabin. “Without both of those experiences, I would never have had the confidence to take on a project of this complexity and scale.” Sailing had also been an integral part of Andre’s childhood. He grew up sailing all along the eastern seaboard, earning his captain’s license (USCG Operator’s License, or “six-pack”) by nineteen, developing a deep affinity for the sea. (left) Peter Arguimbau and son, Andre, enjoy a sail out of Newport Harbor. (top) The basement at 267 Spring Street after Andre and a small crew dug it out by hand and before the massive oak timbers were brought in. SEA HISTORY 168, AUTUMN 2019