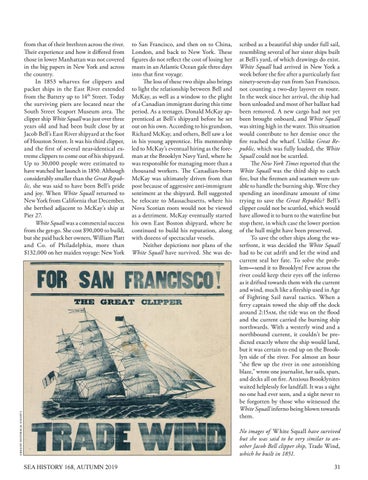 from that of their brethren across the river. Their experience and how it differed from those in lower Manhattan was not covered in the big papers in New York and across the country. In 1853 wharves for clippers and packet ships in the East River extended from the Battery up to 14th Street. Today the surviving piers are located near the South Street Seaport Museum area. The clipper ship White Squall was just over three years old and had been built close by at Jacob Bell’s East River shipyard at the foot of Houston Street. It was his third clipper, and the first of several near-identical extreme clippers to come out of his shipyard. Up to 30,000 people were estimated to have watched her launch in 1850. Although considerably smaller than the Great Republic, she was said to have been Bell’s pride and joy. When White Squall returned to New York from California that December, she berthed adjacent to McKay’s ship at Pier 27. White Squall was a commercial success from the get-go. She cost $90,000 to build, but she paid back her owners, William Platt and Co. of Philadelphia, more than $132,000 on her maiden voyage: New York

to San Francisco, and then on to China, London, and back to New York. These figures do not reflect the cost of losing her masts in an Atlantic Ocean gale three days into that first voyage. The loss of these two ships also brings to light the relationship between Bell and McKay, as well as a window to the plight of a Canadian immigrant during this time period. As a teenager, Donald McKay apprenticed at Bell’s shipyard before he set out on his own. According to his grandson, Richard McKay, and others, Bell saw a lot in his young apprentice. His mentorship led to McKay’s eventual hiring as the foreman at the Brooklyn Navy Yard, where he was responsible for managing more than a thousand workers. The Canadian-born McKay was ultimately driven from that post because of aggressive anti-immigrant sentiment at the shipyard. Bell suggested he relocate to Massachusetts, where his Nova Scotian roots would not be viewed as a detriment. McKay eventually started his own East Boston shipyard, where he continued to build his reputation, along with dozens of spectacular vessels. Neither depictions nor plans of the White Squall have survived. She was de-

scribed as a beautiful ship under full sail, resembling several of her sister ships built at Bell’s yard, of which drawings do exist. White Squall had arrived in New York a week before the fire after a particularly fast ninety-seven-day run from San Francisco, not counting a two-day layover en route. In the week since her arrival, the ship had been unloaded and most of her ballast had been removed. A new cargo had not yet been brought onboard, and White Squall was sitting high in the water. This situation would contribute to her demise once the fire reached the wharf. Unlike Great Republic, which was fully loaded, the White Squall could not be scuttled. The New York Times reported that the White Squall was the third ship to catch fire, but the firemen and seamen were unable to handle the burning ship. Were they spending an inordinate amount of time trying to save the Great Republic? Bell’s clipper could not be scuttled, which would have allowed it to burn to the waterline but stop there, in which case the lower portion of the hull might have been preserved. To save the other ships along the waterfront, it was decided the White Squall had to be cut adrift and let the wind and current seal her fate. To solve the problem—send it to Brooklyn! Few across the river could keep their eyes off the inferno as it drifted towards them with the current and wind, much like a fireship used in Age of Fighting Sail naval tactics. When a ferry captain towed the ship off the dock around 2:15am, the tide was on the flood and the current carried the burning ship northwards. With a westerly wind and a northbound current, it couldn’t be predicted exactly where the ship would land, but it was certain to end up on the Brooklyn side of the river. For almost an hour “she flew up the river in one astonishing blaze,” wrote one journalist, her sails, spars, and decks all on fire. Anxious Brooklynites waited helplessly for landfall. It was a sight no one had ever seen, and a sight never to be forgotten by those who witnessed the White Squall inferno being blown towards them. No images of W hite Squall have survived but she was said to be very similar to another Jacob Bell clipper ship, Trade Wind, which he built in 1851.