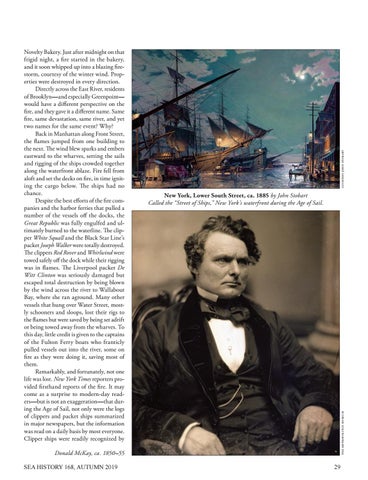 Novelty Bakery. Just after midnight on that frigid night, a fire started in the bakery, and it soon whipped up into a blazing firestorm, courtesy of the winter wind. Properties were destroyed in every direction. Directly across the East River, residents of Brooklyn—and especially Greenpoint— would have a different perspective on the fire, and they gave it a different name. Same fire, same devastation, same river, and yet two names for the same event? Why? Back in Manhattan along Front Street, the flames jumped from one building to the next. The wind blew sparks and embers eastward to the wharves, setting the sails and rigging of the ships crowded together along the waterfront ablaze. Fire fell from aloft and set the decks on fire, in time igniting the cargo below. The ships had no chance. Despite the best efforts of the fire companies and the harbor ferries that pulled a number of the vessels off the docks, the Great Republic was fully engulfed and ultimately burned to the waterline. The clipper White Squall and the Black Star Line’s packet Joseph Walker were totally destroyed. The clippers Red Rover and Whirlwind were towed safely off the dock while their rigging was in flames. The Liverpool packet De Witt Clinton was seriously damaged but escaped total destruction by being blown by the wind across the river to Wallabout Bay, where she ran aground. Many other vessels that hung over Water Street, mostly schooners and sloops, lost their rigs to the flames but were saved by being set adrift or being towed away from the wharves. To this day, little credit is given to the captains of the Fulton Ferry boats who franticly pulled vessels out into the river, some on fire as they were doing it, saving most of them. Remarkably, and fortunately, not one life was lost. New York Times reporters provided firsthand reports of the fire. It may come as a surprise to modern-day readers—but is not an exaggeration—that during the Age of Sail, not only were the logs of clippers and packet ships summarized in major newspapers, but the information was read on a daily basis by most everyone. Clipper ships were readily recognized by