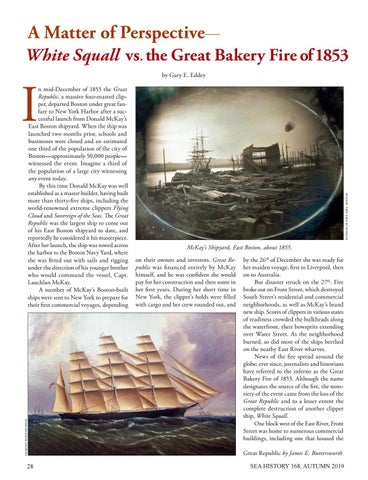 A Matter of Perspective— White Squall vs. the Great Bakery Fire of 1853

n mid-December of 1853 the Great Republic, a massive four-masted clipper, departed Boston under great fanfare to New York Harbor after a successful launch from Donald McKay’s East Boston shipyard. When the ship was launched two months prior, schools and businesses were closed and an estimated one third of the population of the city of Boston—approximately 50,000 people— witnessed the event. Imagine a third of the population of a large city witnessing any event today. By this time Donald McKay was well established as a master builder, having built more than thirty-five ships, including the world-renowned extreme clippers Flying Cloud and Sovereign of the Seas. The Great Republic was the largest ship to come out of his East Boston shipyard to date, and reportedly he considered it his masterpiece. After her launch, the ship was towed across the harbor to the Boston Navy Yard, where she was fitted out with sails and rigging under the direction of his younger brother who would command the vessel, Capt. Lauchlan McKay. A number of McKay’s Boston-built ships were sent to New York to prepare for their first commercial voyages, depending

McKay’s Shipyard, East Boston, about 1855. on their owners and investors. Great Republic was financed entirely by McKay himself, and he was confident she would pay for her construction and then some in her first years. During her short time in New York, the clipper’s holds were filled with cargo and her crew rounded out, and

by the 26th of December she was ready for her maiden voyage, first to Liverpool, then on to Australia. But disaster struck on the 27th. Fire broke out on Front Street, which destroyed South Street’s residential and commercial neighborhoods, as well as McKay’s brand new ship. Scores of clippers in various states of readiness crowded the bulkheads along the waterfront, their bowsprits extending over Water Street. As the neighborhood burned, so did most of the ships berthed on the nearby East River wharves. News of the fire spread around the globe; ever since, journalists and historians have referred to the inferno as the Great Bakery Fire of 1853. Although the name designates the source of the fire, the notoriety of the event came from the loss of the Great Republic and to a lesser extent the complete destruction of another clipper ship, White Squall. One block west of the East River, Front Street was home to numerous commercial buildings, including one that housed the Great Republic by James E. Buttersworth SEA HISTORY 168, AUTUMN 2019