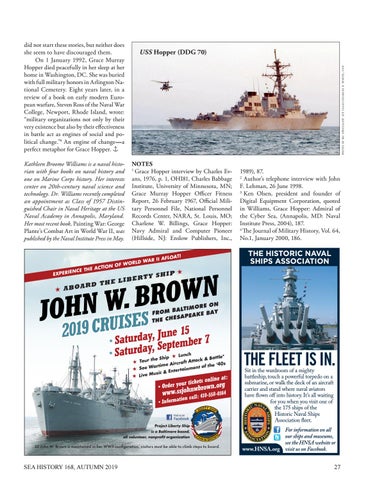 did not start these stories, but neither does she seem to have discouraged them. On 1 January 1992, Grace Murray Hopper died peacefully in her sleep at her home in Washington, DC. She was buried with full military honors in Arlington National Cemetery. Eight years later, in a review of a book on early modern European warfare, Steven Ross of the Naval War College, Newport, Rhode Island, wrote: “military organizations not only by their very existence but also by their effectiveness in battle act as engines of social and political change.”4 An engine of change—a perfect metaphor for Grace Hopper. Kathleen Broome Williams is a naval historian with four books on naval history and one on Marine Corps history. Her interests center on 20th-century naval science and technology. Dr. Williams recently completed an appointment as Class of 1957 Distinguished Chair in Naval Heritage at the US Naval Academy in Annapolis, Maryland. Her most recent book, Painting War: George Plante’s Combat Art in World War II, was published by the Naval Institute Press in May.

project liberty Ship is a Baltimore based, all volunteer, nonprofit organization

SS John W. Brown is maintained in her WWII configuration, visitors must be able to climb steps to board.