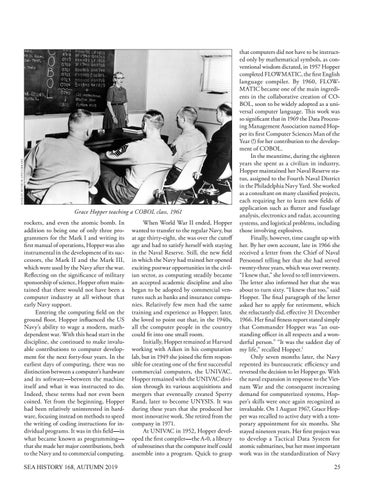 Grace Hopper teaching a COBOL class, 1961 rockets, and even the atomic bomb. In addition to being one of only three programmers for the Mark I and writing its first manual of operations, Hopper was also instrumental in the development of its successors, the Mark II and the Mark III, which were used by the Navy after the war. Reflecting on the significance of military sponsorship of science, Hopper often maintained that there would not have been a computer industry at all without that early Navy support. Entering the computing field on the ground floor, Hopper influenced the US Navy’s ability to wage a modern, mathdependent war. With this head start in the discipline, she continued to make invaluable contributions to computer development for the next forty-four years. In the earliest days of computing, there was no distinction between a computer’s hardware and its software—between the machine itself and what it was instructed to do. Indeed, these terms had not even been coined. Yet from the beginning, Hopper had been relatively uninterested in hardware, focusing instead on methods to speed the writing of coding instructions for individual programs. It was in this field—in what became known as programming— that she made her major contributions, both to the Navy and to commercial computing.

When World War II ended, Hopper wanted to transfer to the regular Navy, but at age thirty-eight, she was over the cutoff age and had to satisfy herself with staying in the Naval Reserve. Still, the new field in which the Navy had trained her opened exciting postwar opportunities in the civilian sector, as computing steadily became an accepted academic discipline and also began to be adopted by commercial ventures such as banks and insurance companies. Relatively few men had the same training and experience as Hopper; later, she loved to point out that, in the 1940s, all the computer people in the country could fit into one small room. Initially, Hopper remained at Harvard working with Aiken in his computation lab, but in 1949 she joined the firm responsible for creating one of the first successful commercial computers, the UNIVAC. Hopper remained with the UNIVAC division through its various acquisitions and mergers that eventually created Sperry Rand, later to become UNYSIS. It was during these years that she produced her most innovative work. She retired from the company in 1971. At UNIVAC in 1952, Hopper developed the first compiler—the A-0, a library of subroutines that the computer itself could assemble into a program. Quick to grasp

that computers did not have to be instructed only by mathematical symbols, as conventional wisdom dictated, in 1957 Hopper completed FLOWMATIC, the first English language compiler. By 1960, FLOWMATIC became one of the main ingredients in the collaborative creation of COBOL, soon to be widely adopted as a universal computer language. This work was so significant that in 1969 the Data Processing Management Association named Hopper its first Computer Sciences Man of the Year (!) for her contribution to the development of COBOL. In the meantime, during the eighteen years she spent as a civilian in industry, Hopper maintained her Naval Reserve status, assigned to the Fourth Naval District in the Philadelphia Navy Yard. She worked as a consultant on many classified projects, each requiring her to learn new fields of application such as flutter and fuselage analysis, electronics and radar, accounting systems, and logistical problems, including those involving explosives. Finally, however, time caught up with her. By her own account, late in 1966 she received a letter from the Chief of Naval Personnel telling her that she had served twenty-three years, which was over twenty. “I knew that,” she loved to tell interviewers. The letter also informed her that she was about to turn sixty. “I knew that too,” said Hopper. The final paragraph of the letter asked her to apply for retirement, which she reluctantly did, effective 31 December 1966. Her final fitness report stated simply that Commander Hopper was “an outstanding officer in all respects and a wonderful person.” “It was the saddest day of my life,” recalled Hopper.1 Only seven months later, the Navy repented its bureaucratic efficiency and reversed the decision to let Hopper go. With the naval expansion in response to the Vietnam War and the consequent increasing demand for computerized systems, Hopper’s skills were once again recognized as invaluable. On 1 August 1967, Grace Hopper was recalled to active duty with a temporary appointment for six months. She stayed nineteen years. Her first project was to develop a Tactical Data System for atomic submarines, but her most important work was in the standardization of Navy