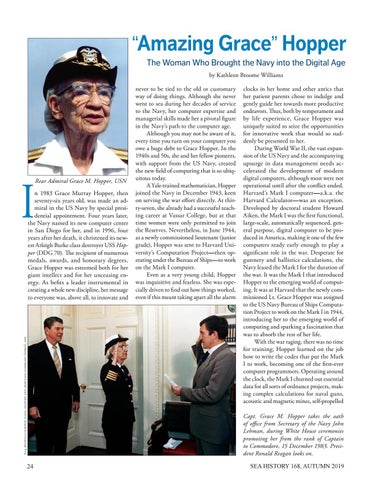 n 1983 Grace Murray Hopper, then seventy-six years old, was made an admiral in the US Navy by special presidential appointment. Four years later, the Navy named its new computer center in San Diego for her, and in 1996, four years after her death, it christened its newest Arleigh Burke class destroyer USS Hopper (DDG 70). The recipient of numerous medals, awards, and honorary degrees, Grace Hopper was esteemed both for her giant intellect and for her unceasing energy. As befits a leader instrumental in creating a whole new discipline, her message to everyone was, above all, to innovate and

never to be tied to the old or customary way of doing things. Although she never went to sea during her decades of service to the Navy, her computer expertise and managerial skills made her a pivotal figure in the Navy’s path to the computer age. Although you may not be aware of it, every time you turn on your computer you owe a huge debt to Grace Hopper. In the 1940s and 50s, she and her fellow pioneers, with support from the US Navy, created the new field of computing that is so ubiquitous today. A Yale-trained mathematician, Hopper joined the Navy in December 1943, keen on serving the war effort directly. At thirty-seven, she already had a successful teaching career at Vassar College, but at that time women were only permitted to join the Reserves. Nevertheless, in June 1944, as a newly commissioned lieutenant (junior grade), Hopper was sent to Harvard University’s Computation Project—then operating under the Bureau of Ships—to work on the Mark I computer. Even as a very young child, Hopper was inquisitive and fearless. She was especially driven to find out how things worked, even if this meant taking apart all the alarm

clocks in her home and other antics that her patient parents chose to indulge and gently guide her towards more productive endeavors. Thus, both by temperament and by life experience, Grace Hopper was uniquely suited to seize the opportunities for innovative work that would so suddenly be presented to her. During World War II, the vast expansion of the US Navy and the accompanying upsurge in data management needs accelerated the development of modern digital computers, although most were not operational until after the conflict ended. Harvard’s Mark I computer—a.k.a. the Harvard Calculator—was an exception. Developed by doctoral student Howard Aiken, the Mark I was the first functional, large-scale, automatically sequenced, general purpose, digital computer to be produced in America, making it one of the few computers ready early enough to play a significant role in the war. Desperate for gunnery and ballistics calculations, the Navy leased the Mark I for the duration of the war. It was the Mark I that introduced Hopper to the emerging world of computing. It was at Harvard that the newly commissioned Lt. Grace Hopper was assigned to the US Navy Bureau of Ships Computation Project to work on the Mark I in 1944, introducing her to the emerging world of computing and sparking a fascination that was to absorb the rest of her life. With the war raging, there was no time for training; Hopper learned on the job how to write the codes that put the Mark I to work, becoming one of the first-ever computer programmers. Operating around the clock, the Mark I churned out essential data for all sorts of ordnance projects, making complex calculations for naval guns, acoustic and magnetic mines, self-propelled Capt. Grace M. Hopper takes the oath of office from Secretary of the Navy John Lehman, during White House ceremonies promoting her from the rank of Captain to Commodore, 15 December 1983. President Ronald Reagan looks on. SEA HISTORY 168, AUTUMN 2019