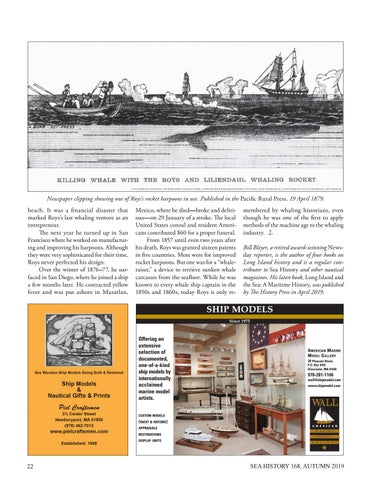 Newspaper clipping showing one of Roys’s rocket harpoons in use. Published in the Pacific Rural Press, 19 April 1879. beach. It was a financial disaster that marked Roys’s last whaling venture as an entrepreneur. The next year he turned up in San Francisco where he worked on manufacturing and improving his harpoons. Although they were very sophisticated for their time, Roys never perfected his design. Over the winter of 1876–77, he surfaced in San Diego, where he joined a ship a few months later. He contracted yellow fever and was put ashore in Mazatlan,

Mexico, where he died—broke and delirious—on 29 January of a stroke. The local United States consul and resident Americans contributed $60 for a proper funeral. From 1857 until even two years after his death, Roys was granted sixteen patents in five countries. Most were for improved rocket harpoons. But one was for a “whaleraiser,” a device to retrieve sunken whale carcasses from the seafloor. While he was known to every whale ship captain in the 1850s and 1860s, today Roys is only re-

membered by whaling historians, even though he was one of the first to apply methods of the machine age to the whaling industry. Bill Bleyer, a retired award-winning Newsday reporter, is the author of four books on Long Island history and is a regular contributor to Sea History and other nautical magazines. His latest book, Long Island and the Sea: A Maritime History, was published by The History Press in April 2019.