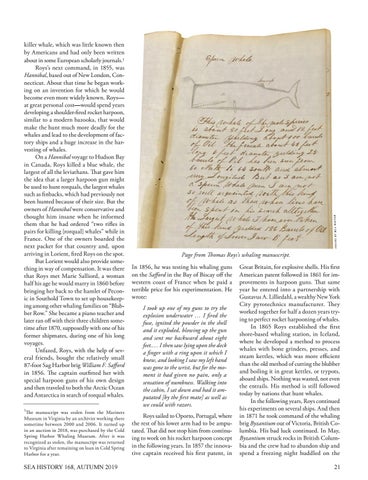 The manuscript was stolen from the Mariners Museum in Virginia by an archivist working there sometime between 2000 and 2006. It turned up in an auction in 2018, was purchased by the Cold Spring Harbor Whaling Museum. After it was recognized as stolen, the manuscript was returned to Virginia after remaining on loan in Cold Spring Harbor for a year.

killer whale, which was little known then by Americans and had only been written about in some European scholarly journals.1 Roys’s next command, in 1855, was Hannibal, based out of New London, Connecticut. About that time he began working on an invention for which he would become even more widely known. Roys— at great personal cost—would spend years developing a shoulder-fired rocket harpoon, similar to a modern bazooka, that would make the hunt much more deadly for the whales and lead to the development of factory ships and a huge increase in the harvesting of whales. On a Hannibal voyage to Hudson Bay in Canada, Roys killed a blue whale, the largest of all the leviathans. That gave him the idea that a larger harpoon gun might be used to hunt rorquals, the largest whales such as finbacks, which had previously not been hunted because of their size. But the owners of Hannibal were conservative and thought him insane when he informed them that he had ordered “two rifles in pairs for killing [rorqual] whales” while in France. One of the owners boarded the next packet for that country and, upon arriving in Lorient, fired Roys on the spot. But Lorient would also provide something in way of compensation. It was there that Roys met Marie Salliord, a woman half his age he would marry in 1860 before bringing her back to the hamlet of Peconic in Southold Town to set up housekeeping among other whaling families on “Blubber Row.” She became a piano teacher and later ran off with their three children sometime after 1870, supposedly with one of his former shipmates, during one of his long voyages. Unfazed, Roys, with the help of several friends, bought the relatively small 87-foot Sag Harbor brig William F. Safford in 1856. The captain outfitted her with special harpoon guns of his own design and then traveled to both the Arctic Ocean and Antarctica in search of rorqual whales.

Page from Thomas Roys’s whaling manuscript. In 1856, he was testing his whaling guns on the Safford in the Bay of Biscay off the western coast of France when he paid a terrible price for his experimentation. He wrote: I took up one of my guns to try the explosion underwater … I fired the fuse, ignited the powder in the shell and it exploded, blowing up the gun and sent me backward about eight feet.… I then saw lying upon the deck a finger with a ring upon it which I knew, and looking I saw my left hand was gone to the wrist, but for the moment it had given no pain, only a sensation of numbness. Walking into the cabin, I sat down and had it amputated [by the first mate] as well as we could with razors. Roys sailed to Oporto, Portugal, where the rest of his lower arm had to be amputated. That did not stop him from continuing to work on his rocket harpoon concept in the following years. In 1857 the innovative captain received his first patent, in

Great Britain, for explosive shells. His first American patent followed in 1861 for improvements in harpoon guns. That same year he entered into a partnership with Gustavus A. Lilliedahl, a wealthy New York City pyrotechnics manufacturer. They worked together for half a dozen years trying to perfect rocket harpooning of whales. In 1865 Roys established the first shore-based whaling station, in Iceland, where he developed a method to process whales with bone grinders, presses, and steam kettles, which was more efficient than the old method of cutting the blubber and boiling it in great kettles, or trypots, aboard ships. Nothing was wasted, not even the entrails. His method is still followed today by nations that hunt whales. In the following years, Roys continued his experiments on several ships. And then in 1871 he took command of the whaling brig Byzantium out of Victoria, British Columbia. His bad luck continued. In May, Byzantium struck rocks in British Columbia and the crew had to abandon ship and spend a freezing night huddled on the