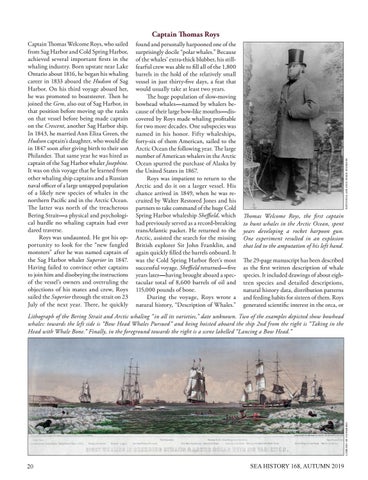 Captain Thomas Welcome Roys, who sailed from Sag Harbor and Cold Spring Harbor, achieved several important firsts in the whaling industry. Born upstate near Lake Ontario about 1816, he began his whaling career in 1833 aboard the Hudson of Sag Harbor. On his third voyage aboard her, he was promoted to boatsteerer. Then he joined the Gem, also out of Sag Harbor, in that position before moving up the ranks on that vessel before being made captain on the Crescent, another Sag Harbor ship. In 1843, he married Ann Eliza Green, the Hudson captain’s daughter, who would die in 1847 soon after giving birth to their son Philander. That same year he was hired as captain of the Sag Harbor whaler Josephine. It was on this voyage that he learned from other whaling ship captains and a Russian naval officer of a large untapped population of a likely new species of whales in the northern Pacific and in the Arctic Ocean. The latter was north of the treacherous Bering Strait—a physical and psychological hurdle no whaling captain had ever dared traverse. Roys was undaunted. He got his opportunity to look for the “new fangled monsters” after he was named captain of the Sag Harbor whaler Superior in 1847. Having failed to convince other captains to join him and disobeying the instructions of the vessel’s owners and overruling the objections of his mates and crew, Roys sailed the Superior through the strait on 23 July of the next year. There, he quickly

found and personally harpooned one of the surprisingly docile “polar whales.” Because of the whales’ extra-thick blubber, his stillfearful crew was able to fill all of the 1,800 barrels in the hold of the relatively small vessel in just thirty-five days, a feat that would usually take at least two years. The huge population of slow-moving bowhead whales—named by whalers because of their large bow-like mouths—discovered by Roys made whaling profitable for two more decades. One subspecies was named in his honor. Fifty whaleships, forty-six of them American, sailed to the Arctic Ocean the following year. The large number of American whalers in the Arctic Ocean spurred the purchase of Alaska by the United States in 1867. Roys was impatient to return to the Arctic and do it on a larger vessel. His chance arrived in 1849, when he was recruited by Walter Restored Jones and his partners to take command of the huge Cold Spring Harbor whaleship Sheffield, which had previously served as a record-breaking transAtlantic packet. He returned to the Arctic, assisted the search for the missing British explorer Sir John Franklin, and again quickly filled the barrels onboard. It was the Cold Spring Harbor fleet’s most successful voyage. Sheffield returned—five years later—having brought aboard a spectacular total of 8,600 barrels of oil and 115,000 pounds of bone. During the voyage, Roys wrote a natural history, “Description of Whales.”

Thomas Welcome Roys, the first captain to hunt whales in the Arctic Ocean, spent years developing a rocket harpoon gun. One experiment resulted in an explosion that led to the amputation of his left hand. The 29-page manuscript has been described as the first written description of whale species. It included drawings of about eighteen species and detailed descriptions, natural history data, distribution patterns and feeding habits for sixteen of them. Roys generated scientific interest in the orca, or

Lithograph of the Bering Strait and Arctic whaling “ in all its varieties,” date unknown. Two of the examples depicted show bowhead whales: towards the left side is “Bow Head Whales Pursued” and being hoisted aboard the ship 2nd from the right is “Taking in the Head with Whale Bone.” Finally, in the foreground towards the right is a scene labelled “Lancing a Bow Head.”