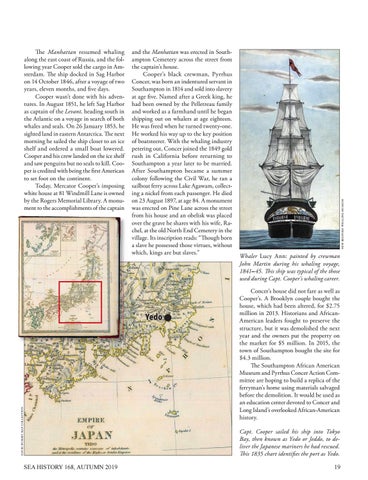 and the Manhattan was erected in Southampton Cemetery across the street from the captain’s house. Cooper’s black crewman, Pyrrhus Concer, was born an indentured servant in Southampton in 1814 and sold into slavery at age five. Named after a Greek king, he had been owned by the Pelletreau family and worked as a farmhand until he began shipping out on whalers at age eighteen. He was freed when he turned twenty-one. He worked his way up to the key position of boatsteerer. With the whaling industry petering out, Concer joined the 1849 gold rush in California before returning to Southampton a year later to be married. After Southampton became a summer colony following the Civil War, he ran a sailboat ferry across Lake Agawam, collecting a nickel from each passenger. He died on 23 August 1897, at age 84. A monument was erected on Pine Lane across the street from his house and an obelisk was placed over the grave he shares with his wife, Rachel, at the old North End Cemetery in the village. Its inscription reads: “Though born a slave he possessed those virtues, without which, kings are but slaves.”

The Manhattan resumed whaling along the east coast of Russia, and the following year Cooper sold the cargo in Amsterdam. The ship docked in Sag Harbor on 14 October 1846, after a voyage of two years, eleven months, and five days. Cooper wasn’t done with his adventures. In August 1851, he left Sag Harbor as captain of the Levant, heading south in the Atlantic on a voyage in search of both whales and seals. On 26 January 1853, he sighted land in eastern Antarctica. The next morning he sailed the ship closer to an ice shelf and ordered a small boat lowered. Cooper and his crew landed on the ice shelf and saw penguins but no seals to kill. Cooper is credited with being the first American to set foot on the continent. Today, Mercator Cooper’s imposing white house at 81 Windmill Lane is owned by the Rogers Memorial Library. A monument to the accomplishments of the captain

Whaler Lucy Ann: painted by crewman John Martin during his whaling voyage, 1841–45. This ship was typical of the those used during Capt. Cooper’s whaling career. Concer’s house did not fare as well as Cooper’s. A Brooklyn couple bought the house, which had been altered, for $2.75 million in 2013. Historians and AfricanAmerican leaders fought to preserve the structure, but it was demolished the next year and the owners put the property on the market for $5 million. In 2015, the town of Southampton bought the site for $4.3 million. The Southampton African American Museum and Pyrrhus Concer Action Committee are hoping to build a replica of the ferryman’s home using materials salvaged before the demolition. It would be used as an education center devoted to Concer and Long Island’s overlooked African-American history. Capt. Cooper sailed his ship into Tokyo Bay, then known as Yedo or Jeddo, to deliver the Japanese mariners he had rescued. This 1835 chart identifies the port as Yedo.