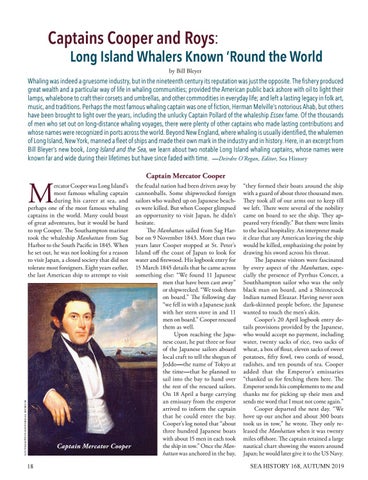 Long Island Whalers Known ’Round the World by Bill Bleyer

Whaling was indeed a gruesome industry, but in the nineteenth century its reputation was just the opposite. The fishery produced great wealth and a particular way of life in whaling communities; provided the American public back ashore with oil to light their lamps, whalebone to craft their corsets and umbrellas, and other commodities in everyday life; and left a lasting legacy in folk art, music, and traditions. Perhaps the most famous whaling captain was one of fiction, Herman Melville’s notorious Ahab, but others have been brought to light over the years, including the unlucky Captain Pollard of the whaleship Essex fame. Of the thousands of men who set out on long-distance whaling voyages, there were plenty of other captains who made lasting contributions and whose names were recognized in ports across the world. Beyond New England, where whaling is usually identified, the whalemen of Long Island, New York, manned a fleet of ships and made their own mark in the industry and in history. Here, in an excerpt from Bill Bleyer’s new book, Long Island and the Sea, we learn about two notable Long Island whaling captains, whose names were known far and wide during their lifetimes but have since faded with time. —Deirdre O’Regan, Editor, Sea History

ercator Cooper was Long Island’s most famous whaling captain during his career at sea, and perhaps one of the most famous whaling captains in the world. Many could boast of great adventures, but it would be hard to top Cooper. The Southampton mariner took the whaleship Manhattan from Sag Harbor to the South Pacific in 1845. When he set out, he was not looking for a reason to visit Japan, a closed society that did not tolerate most foreigners. Eight years earlier, the last American ship to attempt to visit

the feudal nation had been driven away by cannonballs. Some shipwrecked foreign sailors who washed up on Japanese beaches were killed. But when Cooper glimpsed an opportunity to visit Japan, he didn’t hesitate. The Manhattan sailed from Sag Harbor on 9 November 1843. More than two years later Cooper stopped at St. Peter’s Island off the coast of Japan to look for water and firewood. His logbook entry for 15 March 1845 details that he came across something else: “We found 11 Japanese men that have been cast away” or shipwrecked. “We took them on board.” The following day “we fell in with a Japanese junk with her stern stove in and 11 men on board.” Cooper rescued them as well. Upon reaching the Japanese coast, he put three or four of the Japanese sailors aboard local craft to tell the shogun of Jeddo—the name of Tokyo at the time—that he planned to sail into the bay to hand over the rest of the rescued sailors. On 18 April a barge carrying an emissary from the emperor arrived to inform the captain that he could enter the bay. Cooper’s log noted that “about three hundred Japanese boats with about 15 men in each took the ship in tow.” Once the ManCaptain Mercator Cooper hattan was anchored in the bay,

“they formed their boats around the ship with a guard of about three thousand men. They took all of our arms out to keep till we left. There were several of the nobility came on board to see the ship. They appeared very friendly.” But there were limits to the local hospitality. An interpreter made it clear that any American leaving the ship would be killed, emphasizing the point by drawing his sword across his throat. The Japanese visitors were fascinated by every aspect of the Manhattan, especially the presence of Pyrrhus Concer, a Southhampton sailor who was the only black man on board, and a Shinnecock Indian named Eleazar. Having never seen dark-skinned people before, the Japanese wanted to touch the men’s skin. Cooper’s 20 April logbook entry details provisions provided by the Japanese, who would accept no payment, including water, twenty sacks of rice, two sacks of wheat, a box of flour, eleven sacks of sweet potatoes, fifty fowl, two cords of wood, radishes, and ten pounds of tea. Cooper added that the Emperor’s emissaries “thanked us for fetching them here. The Emperor sends his complements to me and thanks me for picking up their men and sends me word that I must not come again.” Cooper departed the next day. “We hove up our anchor and about 300 boats took us in tow,” he wrote. They only released the Manhattan when it was twenty miles offshore. The captain retained a large nautical chart showing the waters around Japan; he would later give it to the US Navy. SEA HISTORY 168, AUTUMN 2019