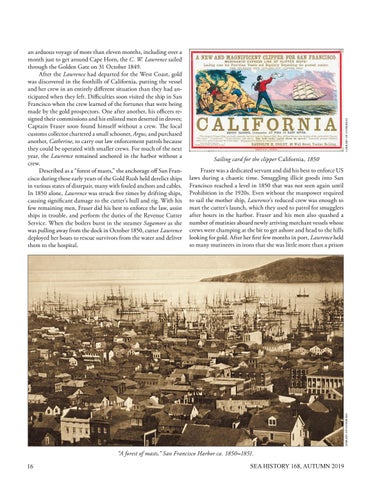 Sailing card for the clipper California, 1850 Fraser was a dedicated servant and did his best to enforce US laws during a chaotic time. Smuggling illicit goods into San Francisco reached a level in 1850 that was not seen again until Prohibition in the 1920s. Even without the manpower required to sail the mother ship, Lawrence’s reduced crew was enough to man the cutter’s launch, which they used to patrol for smugglers after hours in the harbor. Fraser and his men also quashed a number of mutinies aboard newly arriving merchant vessels whose crews were champing at the bit to get ashore and head to the hills looking for gold. After her first few months in port, Lawrence held so many mutineers in irons that she was little more than a prison

an arduous voyage of more than eleven months, including over a month just to get around Cape Horn, the C. W. Lawrence sailed through the Golden Gate on 31 October 1849. After the Lawrence had departed for the West Coast, gold was discovered in the foothills of California, putting the vessel and her crew in an entirely different situation than they had anticipated when they left. Difficulties soon visited the ship in San Francisco when the crew learned of the fortunes that were being made by the gold prospectors. One after another, his officers resigned their commissions and his enlisted men deserted in droves; Captain Fraser soon found himself without a crew. The local customs collector chartered a small schooner, Argus, and purchased another, Catherine, to carry out law enforcement patrols because they could be operated with smaller crews. For much of the next year, the Lawrence remained anchored in the harbor without a crew. Described as a “forest of masts,” the anchorage off San Francisco during these early years of the Gold Rush held derelict ships in various states of disrepair, many with fouled anchors and cables. In 1850 alone, Lawrence was struck five times by drifting ships, causing significant damage to the cutter’s hull and rig. With his few remaining men, Fraser did his best to enforce the law, assist ships in trouble, and perform the duties of the Revenue Cutter Service. When the boilers burst in the steamer Sagamore as she was pulling away from the dock in October 1850, cutter Lawrence deployed her boats to rescue survivors from the water and deliver them to the hospital.