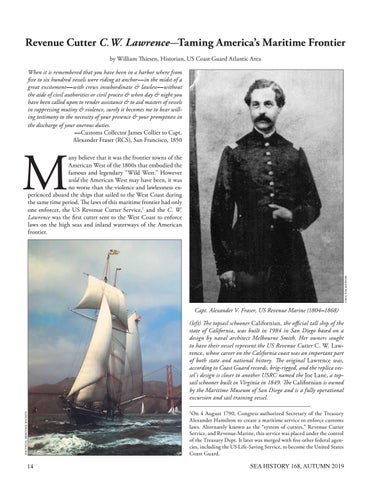 Revenue Cutter C. W. Lawrence—Taming America’s Maritime Frontier by William Thiesen, Historian, US Coast Guard Atlantic Area When it is remembered that you have been in a harbor where from five to six hundred vessels were riding at anchor—in the midst of a great excitement—with crews insubordinate &amp; lawless—without the aide of civil authorities or civil process &amp; when day &amp; night you have been called upon to render assistance &amp; to aid masters of vessels in suppressing mutiny &amp; violence, surely it becomes me to bear willing testimony to the necessity of your presence &amp; your promptness in the discharge of your onerous duties. —Customs Collector James Collier to Capt. Alexander Fraser (RCS), San Francisco, 1850

any believe that it was the frontier towns of the American West of the 1800s that embodied the famous and legendary “Wild West.” However wild the American West may have been, it was no worse than the violence and lawlessness experienced aboard the ships that sailed to the West Coast during the same time period. The laws of this maritime frontier had only one enforcer, the US Revenue Cutter Service,1 and the C. W. Lawrence was the first cutter sent to the West Coast to enforce laws on the high seas and inland waterways of the American frontier.

(left) The topsail schooner Californian, the official tall ship of the state of California, was built in 1984 in San Diego based on a design by naval architect Melbourne Smith. Her owners sought to have their vessel represent the US Revenue Cutter C. W. Lawrence, whose career on the California coast was an important part of both state and national history. The original Lawrence was, according to Coast Guard records, brig-rigged, and the replica vessel’s design is closer to another USRC named the Joe Lane, a topsail schooner built in Virginia in 1849. The Californian is owned by the Maritime Museum of San Diego and is a fully operational excursion and sail training vessel.

4 August 1790, Congress authorized Secretary of the Treasury Alexander Hamilton to create a maritime service to enforce customs laws. Alternately known as the “system of cutters,” Revenue Cutter Service, and Revenue-Marine, this service was placed under the control of the Treasury Dept. It later was merged with five other federal agencies, including the US Life-Saving Service, to become the United States Coast Guard.