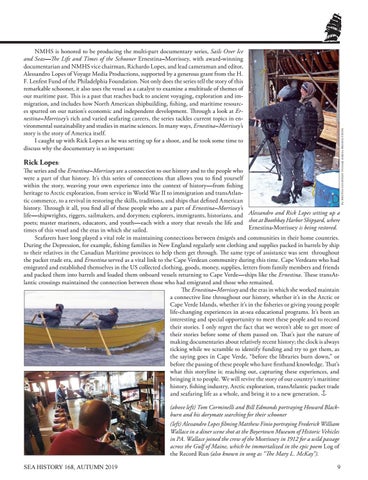 Rick Lopes: The series and the Ernestina–Morrissey are a connection to our history and to the people who were a part of that history. It’s this series of connections that allows you to find yourself within the story, weaving your own experience into the context of history—from fishing heritage to Arctic exploration, from service in World War II to immigration and transAtlantic commerce, to a revival in restoring the skills, traditions, and ships that defined American history. Through it all, you find all of these people who are a part of Ernestina–Morrissey’s life—shipwrights, riggers, sailmakers, and dorymen; explorers, immigrants, historians, and Alessandro and Rick Lopes setting up a poets; master mariners, educators, and youth—each with a story that reveals the life and shot at Boothbay Harbor Shipyard, where Ernestina-Morrissey is being restored. times of this vessel and the eras in which she sailed. Seafarers have long played a vital role in maintaining connections between émigrés and communities in their home countries. During the Depression, for example, fishing families in New England regularly sent clothing and supplies packed in barrels by ship to their relatives in the Canadian Maritime provinces to help them get through. The same type of assistance was sent throughout the packet trade era, and Ernestina served as a vital link to the Cape Verdean community during this time. Cape Verdeans who had emigrated and established themselves in the US collected clothing, goods, money, supplies, letters from family members and friends and packed them into barrels and loaded them onboard vessels returning to Cape Verde—ships like the Ernestina. These transAtlantic crossings maintained the connection between those who had emigrated and those who remained. The Ernestina–Morrissey and the eras in which she worked maintain a connective line throughout our history, whether it’s in the Arctic or Cape Verde Islands, whether it’s in the fisheries or giving young people life-changing experiences in at-sea educational programs. It’s been an interesting and special opportunity to meet these people and to record their stories. I only regret the fact that we weren’t able to get more of their stories before some of them passed on. That’s just the nature of making documentaries about relatively recent history; the clock is always ticking while we scramble to identify funding and try to get them, as the saying goes in Cape Verde, “before the libraries burn down,” or before the passing of these people who have firsthand knowledge. That’s what this storyline is: reaching out, capturing these experiences, and bringing it to people. We will revive the story of our country’s maritime history, fishing industry, Arctic exploration, transAtlantic packet trade and seafaring life as a whole, and bring it to a new generation.

NMHS is honored to be producing the multi-part documentary series, Sails Over Ice and Seas—The Life and Times of the Schooner Ernestina–Morrissey, with award-winning documentarian and NMHS vice chairman, Richardo Lopes, and lead cameraman and editor, Alessandro Lopes of Voyage Media Productions, supported by a generous grant from the H. F. Lenfest Fund of the Philadelphia Foundation. Not only does the series tell the story of this remarkable schooner, it also uses the vessel as a catalyst to examine a multitude of themes of our maritime past. This is a past that reaches back to ancient voyaging, exploration and immigration, and includes how North American shipbuilding, fishing, and maritime resources spurred on our nation’s economic and independent development. Through a look at Ernestina–Morrissey’s rich and varied seafaring careers, the series tackles current topics in environmental sustainability and studies in marine sciences. In many ways, Ernestina–Morrissey’s story is the story of America itself. I caught up with Rick Lopes as he was setting up for a shoot, and he took some time to discuss why the documentary is so important:

(above left) Tom Corminelli and Bill Edmonds portraying Howard Blackburn and his dorymate searching for their schooner (left) Alessandro Lopes filming Matthew Finio portraying Frederick William Wallace in a diner scene shot at the Boyertown Museum of Historic Vehicles in PA. Wallace joined the crew of the Morrissey in 1912 for a wild passage across the Gulf of Maine, which he immortalized in the epic poem Log of the Record Run (also known in song as “The Mary L. McKay”). SEA HISTORY 168, AUTUMN 2019 9