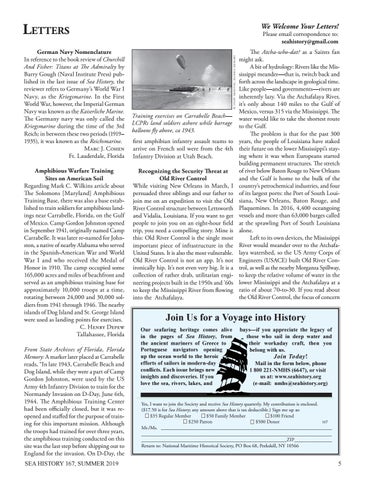 Amphibious Warfare Training Sites on American Soil Regarding Mark C. Wilkins article about The Solomons [Maryland] Amphibious Training Base, there was also a base established to train soldiers for amphibious landings near Carrabelle, Florida, on the Gulf of Mexico. Camp Gordon Johnston opened in September 1941, originally named Camp Carrabelle. It was later re-named for Johnston, a native of nearby Alabama who served in the Spanish-American War and World War I and who received the Medal of Honor in 1910. The camp occupied some 165,000 acres and miles of beachfront and served as an amphibious training base for approximately 10,000 troops at a time, rotating between 24,000 and 30,000 soldiers from 1941 through 1946. The nearby islands of Dog Island and St. George Island were used as landing points for exercises. C. Henry Depew Tallahassee, Florida From State Archives of Florida, Florida Memory: A marker later placed at Carrabelle reads, “In late 1943, Carrabelle Beach and Dog Island, while they were a part of Camp Gordon Johnston, were used by the US Army 4th Infantry Division to train for the Normandy Invasion on D-Day, June 6th, 1944. The Amphibious Training Center had been officially closed, but it was reopened and staffed for the purpose of training for this important mission. Although the troops had trained for over three years, the amphibious training conducted on this site was the last step before shipping out to England for the invasion. On D-Day, the

German Navy Nomenclature In reference to the book review of Churchill And Fisher: Titans at The Admiralty by Barry Gough (Naval Institute Press) published in the last issue of Sea History, the reviewer refers to Germany’s World War I Navy, as the Kriegsmarine. In the First World War, however, the Imperial German Navy was known as the Kaiserliche Marine. The Germany navy was only called the Kriegsmarine during the time of the 3rd Reich; in between these two periods (1919– 1935), it was known as the Reichsmarine. Marc J. Cohen Ft. Lauderdale, Florida

Training exercises on Carrabelle Beach— LCPRs land soldiers ashore while barrage balloons fly above, ca 1943. first amphibian infantry assault teams to arrive on French soil were from the 4th Infantry Division at Utah Beach. Recognizing the Security Threat at Old River Control While visiting New Orleans in March, I persuaded three siblings and our father to join me on an expedition to visit the Old River Control structure between Lettsworth and Vidalia, Louisiana. If you want to get people to join you on an eight-hour field trip, you need a compelling story. Mine is this: Old River Control is the single most important piece of infrastructure in the United States. It is also the most vulnerable. Old River Control is not an app. It’s not ironically hip. It’s not even very big. It is a collection of rather drab, utilitarian engineering projects built in the 1950s and ’60s to keep the Mississippi River from flowing into the Atchafalaya.

The Atcha-who-dat? as a Saints fan might ask. A bit of hydrology: Rivers like the Mississippi meander—that is, twitch back and forth across the landscape in geological time. Like people—and governments—rivers are inherently lazy. Via the Atchafalaya River, it’s only about 140 miles to the Gulf of Mexico, versus 315 via the Mississippi. The water would like to take the shortest route to the Gulf. The problem is that for the past 300 years, the people of Louisiana have staked their future on the lower Mississippi’s staying where it was when Europeans started building permanent structures. The stretch of river below Baton Rouge to New Orleans and the Gulf is home to the bulk of the country’s petrochemical industries, and four of its largest ports: the Port of South Louisiana, New Orleans, Baton Rouge, and Plaquemines. In 2016, 4,400 oceangoing vessels and more than 63,000 barges called at the sprawling Port of South Louisiana alone. Left to its own devices, the Mississippi River would meander over to the Atchafalaya watershed, so the US Army Corps of Engineers (USACE) built Old River Control, as well as the nearby Morganza Spillway, to keep the relative volume of water in the lower Mississippi and the Atchafalaya at a ratio of about 70-to-30. If you read about the Old River Control, the focus of concern