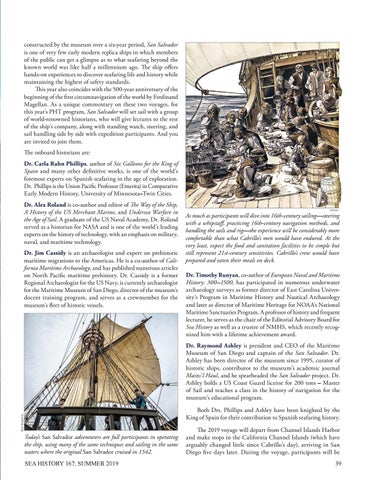 constructed by the museum over a six-year period, San Salvador is one of very few early modern replica ships in which members of the public can get a glimpse as to what seafaring beyond the known world was like half a millennium ago. The ship offers hands-on experiences to discover seafaring life and history while maintaining the highest of safety standards. This year also coincides with the 500-year anniversary of the beginning of the first circumnavigation of the world by Ferdinand Magellan. As a unique commentary on these two voyages, for this year’s PHT program, San Salvador will set sail with a group of world-renowned historians, who will give lectures to the rest of the ship’s company, along with standing watch, steering, and sail handling side by side with expedition participants. And you are invited to join them. The onboard historians are: Dr. Carla Rahn Phillips, author of Six Galleons for the King of Spain and many other definitive works, is one of the world’s foremost experts on Spanish seafaring in the age of exploration. Dr. Phillips is the Union Pacific Professor (Emerita) in Comparative Early Modern History, University of Minnesota–Twin Cities. Dr. Alex Roland is co-author and editor of The Way of the Ship, A History of the US Merchant Marine, and Undersea Warfare in the Age of Sail. A graduate of the US Naval Academy, Dr. Roland served as a historian for NASA and is one of the world’s leading experts on the history of technology, with an emphasis on military, naval, and maritime technology. Dr. Jim Cassidy is an archaeologist and expert on prehistoric maritime migrations to the Americas. He is a co-author of California Maritime Archaeology, and has published numerous articles on North Pacific maritime prehistory. Dr. Cassidy is a former Regional Archaeologist for the US Navy, is currently archaeologist for the Maritime Museum of San Diego, director of the museum’s docent training program, and serves as a crewmember for the museum’s fleet of historic vessels.

As much as participants will dive into 16th-century sailing—steering with a whipstaff, practicing 16th-century navigation methods, and handling the sails and rig—the experience will be considerably more comfortable than what Cabrillo’s men would have endured. At the very least, expect the food and sanitation facilities to be simple but still represent 21st-century sensitivites. Cabrillo’s crew would have prepared and eaten their meals on deck. Dr. Timothy Runyan, co-author of European Naval and Maritime History: 300–1500, has participated in numerous underwater archaeology surveys as former director of East Carolina University’s Program in Maritime History and Nautical Archaeology and later as director of Maritime Heritage for NOAA’s National Maritime Sanctuaries Program. A professor of history and frequent lecturer, he serves as the chair of the Editorial Advisory Board for Sea History as well as a trustee of NMHS, which recently recognized him with a lifetime achievement award. Dr. Raymond Ashley is president and CEO of the Maritime Museum of San Diego and captain of the San Salvador. Dr. Ashley has been director of the museum since 1995, curator of historic ships, contributor to the museum’s academic journal Mains’ l Haul, and he spearheaded the San Salvador project. Dr. Ashley holds a US Coast Guard license for 200 tons – Master of Sail and teaches a class in the history of navigation for the museum’s educational program.

Both Drs. Phillips and Ashley have been knighted by the King of Spain for their contribution to Spanish seafaring history.

Today’s San Salvador adventurers are full participants in operating the ship, using many of the same techniques and sailing in the same waters where the original San Salvador cruised in 1542.

The 2019 voyage will depart from Channel Islands Harbor and make stops in the California Channel Islands (which have arguably changed little since Cabrillo’s day), arriving in San Diego five days later. During the voyage, participants will be