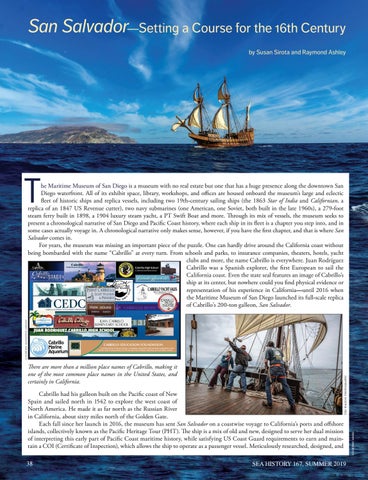 Cabrillo had his galleon built on the Pacific coast of New Spain and sailed north in 1542 to explore the west coast of North America. He made it as far north as the Russian River in California, about sixty miles north of the Golden Gate. Each fall since her launch in 2016, the museum has sent San Salvador on a coastwise voyage to California’s ports and offshore islands, collectively known as the Pacific Heritage Tour (PHT). The ship is a mix of old and new, designed to serve her dual mission of interpreting this early part of Pacific Coast maritime history, while satisfying US Coast Guard requirements to earn and maintain a COI (Certificate of Inspection), which allows the ship to operate as a passenger vessel. Meticulously researched, designed, and 38 38

There are more than a million place names of Cabrillo, making it one of the most common place names in the United States, and certainly in California.

he Maritime Museum of San Diego is a museum with no real estate but one that has a huge presence along the downtown San Diego waterfront. All of its exhibit space, library, workshops, and offices are housed onboard the museum’s large and eclectic fleet of historic ships and replica vessels, including two 19th-century sailing ships (the 1863 Star of India and Californian, a replica of an 1847 US Revenue cutter), two navy submarines (one American, one Soviet, both built in the late 1960s), a 279-foot steam ferry built in 1898, a 1904 luxury steam yacht, a PT Swift Boat and more. Through its mix of vessels, the museum seeks to present a chronological narrative of San Diego and Pacific Coast history, where each ship in its fleet is a chapter you step into, and in some cases actually voyage in. A chronological narrative only makes sense, however, if you have the first chapter, and that is where San Salvador comes in. For years, the museum was missing an important piece of the puzzle. One can hardly drive around the California coast without being bombarded with the name “Cabrillo” at every turn. From schools and parks, to insurance companies, theaters, hotels, yacht clubs and more, the name Cabrillo is everywhere. Juan Rodríguez Cabrillo was a Spanish explorer, the first European to sail the California coast. Even the state seal features an image of Cabrillo’s ship at its center, but nowhere could you find physical evidence or representation of his experience in California—until 2016 when the Maritime Museum of San Diego launched its full-scale replica of Cabrillo’s 200-ton galleon, San Salvador.