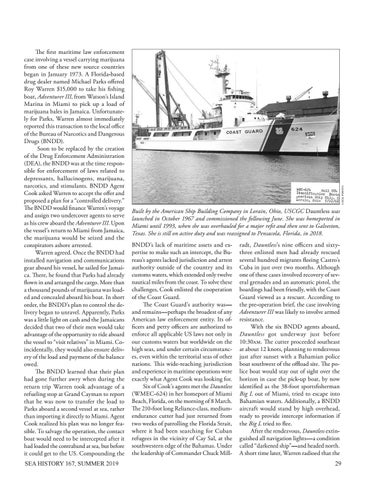 The first maritime law enforcement case involving a vessel carrying marijuana from one of these new source countries began in January 1973. A Florida-based drug dealer named Michael Parks offered Roy Warren $15,000 to take his fishing boat, Adventurer III, from Watson’s Island Marina in Miami to pick up a load of marijuana bales in Jamaica. Unfortunately for Parks, Warren almost immediately reported this transaction to the local office of the Bureau of Narcotics and Dangerous Drugs (BNDD). Soon to be replaced by the creation of the Drug Enforcement Administration (DEA), the BNDD was at the time responsible for enforcement of laws related to depressants, hallucinogens, marijuana, narcotics, and stimulants. BNDD Agent Cook asked Warren to accept the offer and proposed a plan for a “controlled delivery.” The BNDD would finance Warren’s voyage and assign two undercover agents to serve as his crew aboard the Adventurer III. Upon the vessel’s return to Miami from Jamaica, the marijuana would be seized and the conspirators ashore arrested. Warren agreed. Once the BNDD had installed navigation and communications gear aboard his vessel, he sailed for Jamaica. There, he found that Parks had already flown in and arranged the cargo. More than a thousand pounds of marijuana was loaded and concealed aboard his boat. In short order, the BNDD’s plan to control the delivery began to unravel. Apparently, Parks was a little light on cash and the Jamaicans decided that two of their men would take advantage of the opportunity to ride aboard the vessel to “visit relatives” in Miami. Coincidentally, they would also ensure delivery of the load and payment of the balance owed. The BNDD learned that their plan had gone further awry when during the return trip Warren took advantage of a refueling stop at Grand Cayman to report that he was now to transfer the load to Parks aboard a second vessel at sea, rather than importing it directly to Miami. Agent Cook realized his plan was no longer feasible. To salvage the operation, the contact boat would need to be intercepted after it had loaded the contraband at sea, but before it could get to the US. Compounding the

Built by the American Ship Building Company in Lorain, Ohio, USCGC Dauntless was launched in October 1967 and commissioned the following June. She was homeported in Miami until 1993, when she was overhauled for a major refit and then sent to Galveston, Texas. She is still on active duty and was reassigned to Pensacola, Florida, in 2018. BNDD’s lack of maritime assets and expertise to make such an intercept, the Bureau’s agents lacked jurisdiction and arrest authority outside of the country and its customs waters, which extended only twelve nautical miles from the coast. To solve these challenges, Cook enlisted the cooperation of the Coast Guard. The Coast Guard’s authority was— and remains—perhaps the broadest of any American law enforcement entity. Its officers and petty officers are authorized to enforce all applicable US laws not only in our customs waters but worldwide on the high seas, and under certain circumstances, even within the territorial seas of other nations. This wide-reaching jurisdiction and experience in maritime operations were exactly what Agent Cook was looking for. Six of Cook’s agents met the Dauntless (WMEC-624) in her homeport of Miami Beach, Florida, on the morning of 8 March. The 210-foot long Reliance-class, mediumendurance cutter had just returned from two weeks of patrolling the Florida Strait, where it had been searching for Cuban refugees in the vicinity of Cay Sal, at the southwestern edge of the Bahamas. Under the leadership of Commander Chuck Mill-

radt, Dauntless’s nine officers and sixtythree enlisted men had already rescued several hundred migrants fleeing Castro’s Cuba in just over two months. Although one of these cases involved recovery of several grenades and an automatic pistol, the boardings had been friendly, with the Coast Guard viewed as a rescuer. According to the pre-operation brief, the case involving Adventurer III was likely to involve armed resistance. With the six BNDD agents aboard, Dauntless got underway just before 10:30am. The cutter proceeded southeast at about 12 knots, planning to rendezvous just after sunset with a Bahamian police boat southwest of the offload site. The police boat would stay out of sight over the horizon in case the pick-up boat, by now identified as the 38-foot sportsfisherman Big L out of Miami, tried to escape into Bahamian waters. Additionally, a BNDD aircraft would stand by high overhead, ready to provide intercept information if the Big L tried to flee. After the rendezvous, Dauntless extinguished all navigation lights—a condition called “darkened ship”—and headed north. A short time later, Warren radioed that the