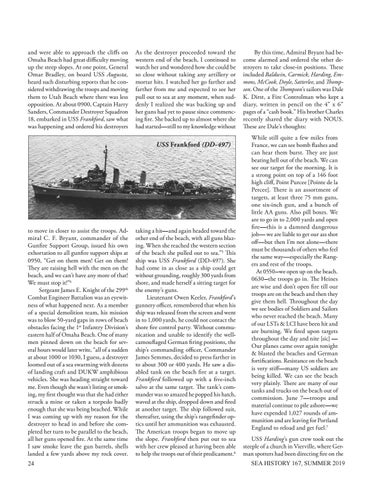 and were able to approach the cliffs on Omaha Beach had great difficulty moving up the steep slopes. At one point, General Omar Bradley, on board USS Augusta, heard such disturbing reports that he considered withdrawing the troops and moving them to Utah Beach where there was less opposition. At about 0900, Captain Harry Sanders, Commander Destroyer Squadron 18, embarked in USS Frankford, saw what was happening and ordered his destroyers

As the destroyer proceeded toward the western end of the beach, I continued to watch her and wondered how she could be so close without taking any artillery or mortar hits. I watched her go farther and farther from me and expected to see her pull out to sea at any moment, when suddenly I realized she was backing up and her guns had yet to pause since commencing fire. She backed up to almost where she had started—still to my knowledge without

to move in closer to assist the troops. Admiral C. F. Bryant, commander of the Gunfire Support Group, issued his own exhortation to all gunfire support ships at 0950, “Get on them men! Get on them! They are raising hell with the men on the beach, and we can’t have any more of that! We must stop it!”4 Sergeant James E. Knight of the 299th Combat Engineer Battalion was an eyewitness of what happened next. As a member of a special demolition team, his mission was to blow 50-yard gaps in rows of beach obstacles facing the 1st Infantry Division’s eastern half of Omaha Beach. One of many men pinned down on the beach for several hours would later write, “all of a sudden at about 1000 or 1030, I guess, a destroyer loomed out of a sea swarming with dozens of landing craft and DUKW amphibious vehicles. She was heading straight toward me. Even though she wasn’t listing or smoking, my first thought was that she had either struck a mine or taken a torpedo badly enough that she was being beached. While I was coming up with my reason for the destroyer to head in and before she completed her turn to be parallel to the beach, all her guns opened fire. At the same time I saw smoke leave the gun barrels, shells landed a few yards above my rock cover. 24

taking a hit—and again headed toward the other end of the beach, with all guns blazing. When she reached the western section of the beach she pulled out to sea.”5 This ship was USS Frankford (DD-497). She had come in as close as a ship could get without grounding, roughly 300 yards from shore, and made herself a sitting target for the enemy’s guns. Lieutenant Owen Keeler, Frankford’s gunnery officer, remembered that when his ship was released from the screen and went in to 1,000 yards, he could not contact the shore fire control party. Without communication and unable to identify the wellcamouflaged German firing positions, the ship’s commanding officer, Commander James Semmes, decided to press farther in to about 300 or 400 yards. He saw a disabled tank on the beach fire at a target. Frankford followed up with a five-inch salvo at the same target. The tank’s commander was so amazed he popped his hatch, waved at the ship, dropped down and fired at another target. The ship followed suit, thereafter, using the ship’s rangefinder optics until her ammunition was exhausted. The American troops began to move up the slope. Frankford then put out to sea with her crew pleased at having been able to help the troops out of their predicament.6

By this time, Admiral Bryant had become alarmed and ordered the other destroyers to take close-in positions. These included Baldwin, Carmick, Harding, Emmons, McCook, Doyle, Satterlee, and Thompson. One of the Thompson’s sailors was Dale K. Dirst, a Fire Controlman who kept a diary, written in pencil on the 4” x 6” pages of a “cash book.” His brother Charles recently shared the diary with NOUS. These are Dale’s thoughts: While still quite a few miles from France, we can see bomb flashes and can hear them burst. They are just beating hell out of the beach. We can see our target for the morning. It is a strong point on top of a 146 foot high cliff, Point Purcee [Pointe de la Percee]. There is an assortment of targets, at least three 75 mm guns, one six-inch gun, and a bunch of little AA guns. Also pill boxes. We are to go in to 2,000 yards and open fire—this is a damned dangerous job— we are liable to get our ass shot off—but then I’m not alone—there must be thousands of others who feel the same way—especially the Rangers and rest of the troops. At 0550–we open up on the beach. 0630–the troops go in. The Heines are wise and don’t open fire till our troops are on the beach and then they give them hell. Throughout the day we see bodies of Soldiers and Sailors who never reached the beach. Many of our LSTs &amp; LCI have been hit and are burning. We fired upon targets throughout the day and nite [sic] — Our planes came over again tonight &amp; blasted the beaches and German fortifications. Resistance on the beach is very stiff—many US soldiers are being killed. We can see the beach very plainly. There are many of our tanks and trucks on the beach out of commission. June 7—troops and material continue to pile ashore—we have expended 1,027 rounds of ammunition and are leaving for Portland England to reload and get fuel.7 USS Harding’s gun crew took out the steeple of a church in Vierville, where German spotters had been directing fire on the SEA HISTORY 167, SUMMER 2019