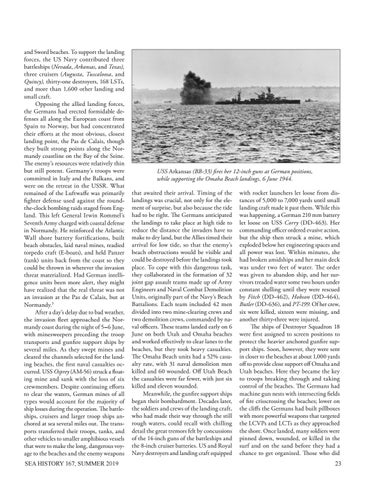 and Sword beaches. To support the landing forces, the US Navy contributed three battleships (Nevada, Arkansas, and Texas), three cruisers (Augusta, Tuscaloosa, and Quincy), thirty-one destroyers, 168 LSTs, and more than 1,600 other landing and small craft. Opposing the allied landing forces, the Germans had erected formidable defenses all along the European coast from Spain to Norway, but had concentrated their efforts at the most obvious, closest landing point, the Pas de Calais, though they built strong points along the Normandy coastline on the Bay of the Seine. The enemy’s resources were relatively thin but still potent. Germany’s troops were committed in Italy and the Balkans, and were on the retreat in the USSR. What remained of the Luftwaffe was primarily fighter defense used against the roundthe-clock bombing raids staged from England. This left General Irwin Rommel’s Seventh Army charged with coastal defense in Normandy. He reinforced the Atlantic Wall shore battery fortifications, built beach obstacles, laid naval mines, readied torpedo craft (E-boats), and held Panzer (tank) units back from the coast so they could be thrown in wherever the invasion threat materialized. Had German intelligence units been more alert, they might have realized that the real threat was not an invasion at the Pas de Calais, but at Normandy.3 After a day’s delay due to bad weather, the invasion fleet approached the Normandy coast during the night of 5–6 June, with minesweepers preceding the troop transports and gunfire support ships by several miles. As they swept mines and cleared the channels selected for the landing beaches, the first naval casualties occurred. USS Osprey (AM-56) struck a floating mine and sank with the loss of six crewmembers. Despite continuing efforts to clear the waters, German mines of all types would account for the majority of ship losses during the operation. The battleships, cruisers and larger troop ships anchored at sea several miles out. The transports transferred their troops, tanks, and other vehicles to smaller amphibious vessels that were to make the long, dangerous voyage to the beaches and the enemy weapons

USS Arkansas (BB-33) fires her 12-inch guns at German positions, while supporting the Omaha Beach landings, 6 June 1944. that awaited their arrival. Timing of the landings was crucial, not only for the element of surprise, but also because the tide had to be right. The Germans anticipated the landings to take place at high tide to reduce the distance the invaders have to make to dry land, but the Allies timed their arrival for low tide, so that the enemy’s beach obstructions would be visible and could be destroyed before the landings took place. To cope with this dangerous task, they collaborated in the formation of 32 joint gap assault teams made up of Army Engineers and Naval Combat Demolition Units, originally part of the Navy’s Beach Battalions. Each team included 42 men divided into two mine-clearing crews and two demolition crews, commanded by naval officers. These teams landed early on 6 June on both Utah and Omaha beaches and worked effectively to clear lanes to the beaches, but they took heavy casualties. The Omaha Beach units had a 52% casualty rate, with 31 naval demolition men killed and 60 wounded. Off Utah Beach the casualties were far fewer, with just six killed and eleven wounded. Meanwhile, the gunfire support ships began their bombardment. Decades later, the soldiers and crews of the landing craft, who had made their way through the still rough waters, could recall with chilling detail the great tremors felt by concussions of the 14-inch guns of the battleships and the 8-inch cruiser batteries. US and Royal Navy destroyers and landing craft equipped

with rocket launchers let loose from distances of 5,000 to 7,000 yards until small landing craft made it past them. While this was happening, a German 210 mm battery let loose on USS Corry (DD-463). Her commanding officer ordered evasive action, but the ship then struck a mine, which exploded below her engineering spaces and all power was lost. Within minutes, she had broken amidships and her main deck was under two feet of water. The order was given to abandon ship, and her survivors treaded water some two hours under constant shelling until they were rescued by Fitch (DD-462), Hobson (DD-464), Butler (DD-636), and PT-199. Of her crew, six were killed, sixteen were missing, and another thirty-three were injured. The ships of Destroyer Squadron 18 were first assigned to screen positions to protect the heavier anchored gunfire support ships. Soon, however, they were sent in closer to the beaches at about 1,000 yards off to provide close support off Omaha and Utah beaches. Here they became the key to troops breaking through and taking control of the beaches. The Germans had machine gun nests with intersecting fields of fire crisscrossing the beaches; lower on the cliffs the Germans had built pillboxes with more powerful weapons that targeted the LCVPs and LCTs as they approached the shore. Once landed, many soldiers were pinned down, wounded, or killed in the surf and on the sand before they had a chance to get organized. Those who did