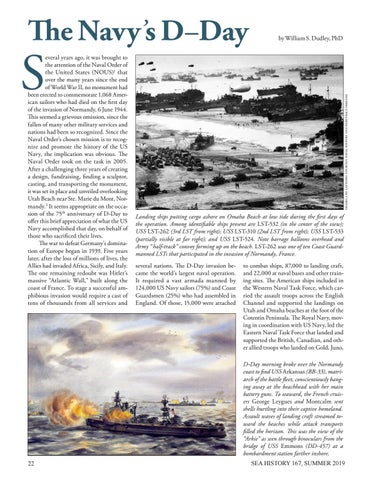 everal years ago, it was brought to the attention of the Naval Order of the United States (NOUS)1 that over the many years since the end of World War II, no monument had been erected to commemorate 1,068 American sailors who had died on the first day of the invasion of Normandy, 6 June 1944. This seemed a grievous omission, since the fallen of many other military services and nations had been so recognized. Since the Naval Order’s chosen mission is to recognize and promote the history of the US Navy, the implication was obvious. The Naval Order took on the task in 2005. After a challenging three years of creating a design, fundraising, finding a sculptor, casting, and transporting the monument, it was set in place and unveiled overlooking Utah Beach near Ste. Marie du Mont, Normandy.2 It seems appropriate on the occasion of the 75th anniversary of D-Day to offer this brief appreciation of what the US Navy accomplished that day, on behalf of those who sacrificed their lives. The war to defeat Germany’s domination of Europe began in 1939. Five years later, after the loss of millions of lives, the Allies had invaded Africa, Sicily, and Italy. The one remaining redoubt was Hitler’s massive “Atlantic Wall,” built along the coast of France. To stage a successful amphibious invasion would require a cast of tens of thousands from all services and

Landing ships putting cargo ashore on Omaha Beach at low tide during the first days of the operation. Among identifiable ships present are LST-532 (in the center of the view); USS LST-262 (3rd LST from right); USS LST-310 (2nd LST from right); USS LST-533 (partially visible at far right); and USS LST-524. Note barrage balloons overhead and Army “ half-track” convoy forming up on the beach. LST-262 was one of ten Coast Guardmanned LSTs that participated in the invasion of Normandy, France. several nations. The D-Day invasion became the world’s largest naval operation. It required a vast armada manned by 124,000 US Navy sailors (75%) and Coast Guardsmen (25%) who had assembled in England. Of those, 15,000 were attached

to combat ships, 87,000 to landing craft, and 22,000 at naval bases and other training sites. The American ships included in the Western Naval Task Force, which carried the assault troops across the English Channel and supported the landings on Utah and Omaha beaches at the foot of the Cotentin Peninsula. The Royal Navy, moving in coordination with US Navy, led the Eastern Naval Task Force that landed and supported the British, Canadian, and other allied troops who landed on Gold, Juno, D-Day morning broke over the Normandy coast to find USS Arkansas (BB-33), matriarch of the battle fleet, conscientiously banging away at the beachhead with her main battery guns. To seaward, the French cruisers George Leygues and Montcalm sent shells hurtling into their captive homeland. Assault waves of landing craft streamed toward the beaches while attack transports filled the horizon. This was the view of the “Arkie” as seen through binoculars from the bridge of USS Emmons (DD-457) at a bombardment station farther inshore.