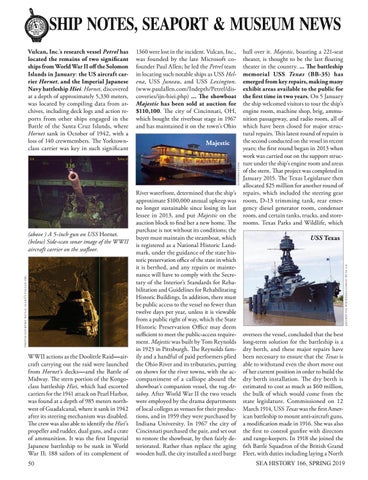 (above ) A 5-inch gun on USS Hornet. (below) Side-scan sonar image of the WWII aircraft carrier on the seafloor.

WWII actions as the Doolittle Raid—aircraft carrying out the raid were launched from Hornet’s decks—and the Battle of Midway. The stern portion of the Kongoclass battleship Hiei, which had escorted carriers for the 1941 attack on Pearl Harbor, was found at a depth of 985 meters northwest of Guadalcanal, where it sank in 1942 after its steering mechanism was disabled. The crew was also able to identify the Hiei’s propeller and rudder, dual guns, and a crate of ammunition. It was the first Imperial Japanese battleship to be sunk in World War II; 188 sailors of its complement of 50

River waterfront, determined that the ship’s approximate $100,000 annual upkeep was no longer sustainable since losing its last lessee in 2013, and put Majestic on the auction block to find her a new home. The purchase is not without its conditions; the buyer must maintain the steamboat, which is registered as a National Historic Landmark, under the guidance of the state historic preservation office of the state in which it is berthed, and any repairs or maintenance will have to comply with the Secretary of the Interior’s Standards for Rehabilitation and Guidelines for Rehabilitating Historic Buildings. In addition, there must be public access to the vessel no fewer than twelve days per year, unless it is viewable from a public right of way, which the State Historic Preservation Office may deem sufficient to meet the public-access requirement. Majestic was built by Tom Reynolds in 1923 in Pittsburgh. The Reynolds family and a handful of paid performers plied the Ohio River and its tributaries, putting on shows for the river towns, with the accompaniment of a calliope aboard the showboat’s companion vessel, the tug Attaboy. After World War II the two vessels were employed by the drama departments of local colleges as venues for their productions, and in 1959 they were purchased by Indiana University. In 1967 the city of Cincinnati purchased the pair, and set out to restore the showboat, by then fairly deteriorated. Rather than replace the aging wooden hull, the city installed a steel barge

hull over it. Majestic, boasting a 221-seat theater, is thought to be the last floating theater in the country. ... The battleship memorial USS Texas (BB-35) has emerged from key repairs, making many exhibit areas available to the public for the first time in two years. On 5 January the ship welcomed visitors to tour the ship’s engine room, machine shop, brig, ammunition passageway, and radio room, all of which have been closed for major structural repairs. This latest round of repairs is the second conducted on the vessel in recent years; the first round began in 2013 when work was carried out on the support structure under the ship’s engine room and areas of the stern. That project was completed in January 2015. The Texas Legislature then allocated $25 million for another round of repairs, which included the steering gear room, D-13 trimming tank, rear emergency diesel generator room, condenser room, and certain tanks, trucks, and storerooms. Texas Parks and Wildlife, which

jacobst via wikipedia.com cc by sa 3.0

1360 were lost in the incident. Vulcan, Inc., was founded by the late Microsoft cofounder Paul Allen; he led the Petrel team in locating such notable ships as USS Helena, USS Juneau, and USS Lexington. (www.paulallen.com/Indepth/Petrel/discoveries/ijn-hiei.php) ... The showboat Majestic has been sold at auction for $110,100. The city of Cincinnati, OH, which bought the riverboat stage in 1967 and has maintained it on the town’s Ohio

Vulcan, Inc.’s research vessel Petrel has located the remains of two significant ships from World War II off the Solomon Islands in January: the US aircraft carrier Hornet, and the Imperial Japanese Navy battleship Hiei. Hornet, discovered at a depth of approximately 5,330 meters, was located by compiling data from archives, including deck logs and action reports from other ships engaged in the Battle of the Santa Cruz Islands, where Hornet sank in October of 1942, with a loss of 140 crewmembers. The Yorktownclass carrier was key in such significant

oversees the vessel, concluded that the best long-term solution for the battleship is a dry berth, and these major repairs have been necessary to ensure that the Texas is able to withstand even the short move out of her current position in order to build the dry berth installation. The dry berth is estimated to cost as much as $60 million, the bulk of which would come from the state legislature. Commissioned on 12 March 1914, USS Texas was the first American battleship to mount anti-aircraft guns, a modification made in 1916. She was also the first to control gunfire with directors and range-keepers. In 1918 she joined the 6th Battle Squadron of the British Grand Fleet, with duties including laying a North SEA HISTORY 166, SPRING 2019