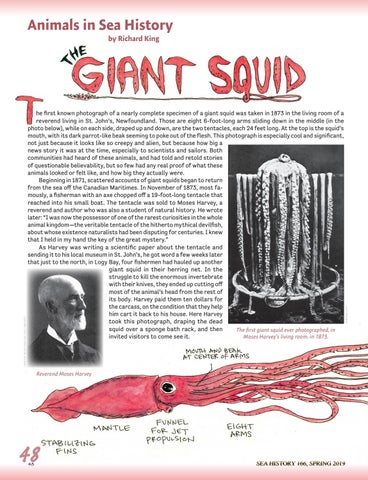 he first known photograph of a nearly complete specimen of a giant squid was taken in 1873 in the living room of a reverend living in St. John’s, Newfoundland. Those are eight 6-foot-long arms sliding down in the middle (in the photo below), while on each side, draped up and down, are the two tentacles, each 24 feet long. At the top is the squid’s mouth, with its dark parrot-like beak seeming to poke out of the flesh. This photograph is especially cool and significant, not just because it looks like so creepy and alien, but because how big a news story it was at the time, especially to scientists and sailors. Both communities had heard of these animals, and had told and retold stories of questionable believability, but so few had any real proof of what these animals looked or felt like, and how big they actually were. Beginning in 1871, scattered accounts of giant squids began to return from the sea off the Canadian Maritimes. In November of 1873, most famously, a fisherman with an axe chopped off a 19-foot-long tentacle that reached into his small boat. The tentacle was sold to Moses Harvey, a reverend and author who was also a student of natural history. He wrote later: “I was now the possessor of one of the rarest curiosities in the whole animal kingdom—the veritable tentacle of the hitherto mythical devilfish, about whose existence naturalists had been disputing for centuries. I knew that I held in my hand the key of the great mystery.” As Harvey was writing a scientific paper about the tentacle and sending it to his local museum in St. John’s, he got word a few weeks later that just to the north, in Logy Bay, four fishermen had hauled up another giant squid in their herring net. In the struggle to kill the enormous invertebrate with their knives, they ended up cutting off most of the animal’s head from the rest of its body. Harvey paid them ten dollars for the carcass, on the condition that they help him cart it back to his house. Here Harvey took this photograph, draping the dead squid over a sponge bath rack, and then The first giant squid ever photographed, in invited visitors to come see it. Moses Harvey’s living room, in 1873.