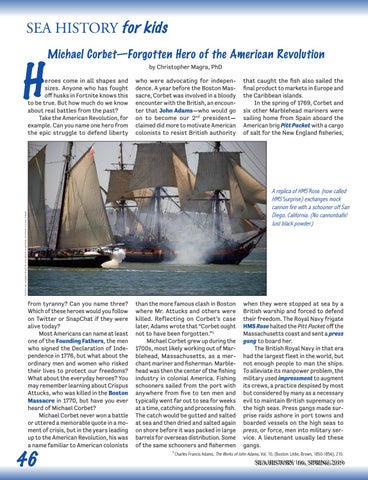 eroes come in all shapes and sizes. Anyone who has fought off husks in Fortnite knows this to be true. But how much do we know about real battles from the past? Take the American Revolution, for example. Can you name one hero from the epic struggle to defend liberty

who were advocating for independence. A year before the Boston Massacre, Corbet was involved in a bloody encounter with the British, an encounter that John Adams—who would go on to become our 2nd president— claimed did more to motivate American colonists to resist British authority

that caught the fish also sailed the final product to markets in Europe and the Caribbean islands. In the spring of 1769, Corbet and six other Marblehead mariners were sailing home from Spain aboard the American brig Pitt Packet with a cargo of salt for the New England fisheries,

from tyranny? Can you name three? Which of these heroes would you follow on Twitter or SnapChat if they were alive today? Most Americans can name at least one of the Founding Fathers, the men who signed the Declaration of Independence in 1776, but what about the ordinary men and women who risked their lives to protect our freedoms? What about the everyday heroes? You may remember learning about Crispus Attucks, who was killed in the Boston Massacre in 1770, but have you ever heard of Michael Corbet? Michael Corbet never won a battle or uttered a memorable quote in a moment of crisis, but in the years leading up to the American Revolution, his was a name familiar to American colonists

than the more famous clash in Boston where Mr. Attucks and others were killed. Reflecting on Corbet’s case later, Adams wrote that “Corbet ought not to have been forgotten.”1 Michael Corbet grew up during the 1700s, most likely working out of Marblehead, Massachusetts, as a merchant mariner and fisherman. Marblehead was then the center of the fishing industry in colonial America. Fishing schooners sailed from the port with anywhere from five to ten men and typically went far out to sea for weeks at a time, catching and processing fish. The catch would be gutted and salted at sea and then dried and salted again on shore before it was packed in large barrels for overseas distribution. Some of the same schooners and fishermen 1

when they were stopped at sea by a British warship and forced to defend their freedom. The Royal Navy frigate HMS Rose halted the Pitt Packet off the Massachusetts coast and sent a press gang to board her. The British Royal Navy in that era had the largest fleet in the world, but not enough people to man the ships. To alleviate its manpower problem, the military used impressment to augment its crews, a practice despised by most but considered by many as a necessary evil to maintain British supremacy on the high seas. Press gangs made surprise raids ashore in port towns and boarded vessels on the high seas to press, or force, men into military service. A lieutenant usually led these gangs.