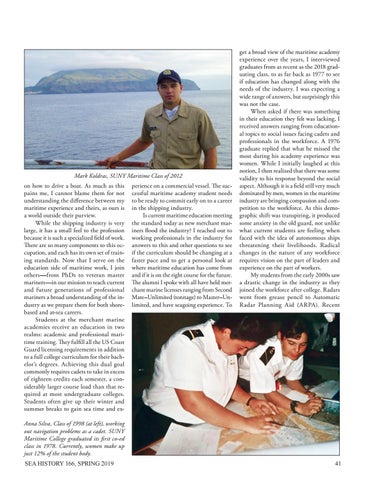 Mark Koldras, SUNY Maritime Class of 2012 on how to drive a boat. As much as this pains me, I cannot blame them for not understanding the difference between my maritime experience and theirs, as ours is a world outside their purview. While the shipping industry is very large, it has a small feel to the profession because it is such a specialized field of work. There are so many components to this occupation, and each has its own set of training standards. Now that I serve on the education side of maritime work, I join others—from PhDs to veteran master mariners—in our mission to teach current and future generations of professional mariners a broad understanding of the industry as we prepare them for both shorebased and at-sea careers. Students at the merchant marine academies receive an education in two realms: academic and professional maritime training. They fulfill all the US Coast Guard licensing requirements in addition to a full college curriculum for their bachelor’s degrees. Achieving this dual goal commonly requires cadets to take in excess of eighteen credits each semester, a considerably larger course load than that required at most undergraduate colleges. Students often give up their winter and summer breaks to gain sea time and ex-

perience on a commercial vessel. The successful maritime academy student needs to be ready to commit early on to a career in the shipping industry. Is current maritime education meeting the standard today as new merchant mariners flood the industry? I reached out to working professionals in the industry for answers to this and other questions to see if the curriculum should be changing at a faster pace and to get a personal look at where maritime education has come from and if it is on the right course for the future. The alumni I spoke with all have held merchant marine licenses ranging from Second Mate–Unlimited (tonnage) to Master–Unlimited, and have seagoing experience. To

get a broad view of the maritime academy experience over the years, I interviewed graduates from as recent as the 2018 graduating class, to as far back as 1977 to see if education has changed along with the needs of the industry. I was expecting a wide range of answers, but surprisingly this was not the case. When asked if there was something in their education they felt was lacking, I received answers ranging from educational topics to social issues facing cadets and professionals in the workforce. A 1976 graduate replied that what he missed the most during his academy experience was women. While I initially laughed at this notion, I then realized that there was some validity to his response beyond the social aspect. Although it is a field still very much dominated by men, women in the maritime industry are bringing compassion and competition to the workforce. As this demographic shift was transpiring, it produced some anxiety in the old guard, not unlike what current students are feeling when faced with the idea of autonomous ships threatening their livelihoods. Radical changes in the nature of any workforce requires vision on the part of leaders and experience on the part of workers. My students from the early 2000s saw a drastic change in the industry as they joined the workforce after college. Radars went from grease pencil to Automatic Radar Planning Aid (ARPA). Recent