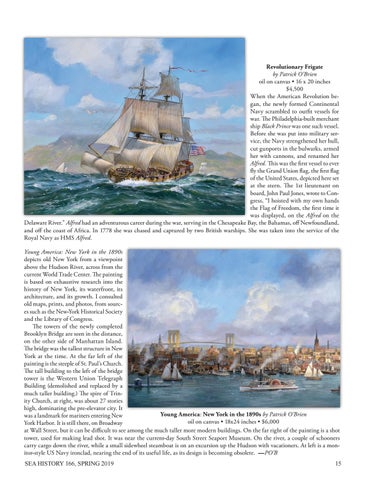 Revolutionary Frigate by Patrick O’Brien oil on canvas • 16 x 20 inches $4,500 When the American Revolution began, the newly formed Continental Navy scrambled to outfit vessels for war. The Philadelphia-built merchant ship Black Prince was one such vessel. Before she was put into military service, the Navy strengthened her hull, cut gunports in the bulwarks, armed her with cannons, and renamed her Alfred. This was the first vessel to ever fly the Grand Union flag, the first flag of the United States, depicted here set at the stern. The 1st lieutenant on board, John Paul Jones, wrote to Congress, “I hoisted with my own hands the Flag of Freedom, the first time it was displayed, on the Alfred on the Delaware River.” Alfred had an adventurous career during the war, serving in the Chesapeake Bay, the Bahamas, off Newfoundland, and off the coast of Africa. In 1778 she was chased and captured by two British warships. She was taken into the service of the Royal Navy as HMS Alfred. Young America: New York in the 1890s depicts old New York from a viewpoint above the Hudson River, across from the current World Trade Center. The painting is based on exhaustive research into the history of New York, its waterfront, its architecture, and its growth. I consulted old maps, prints, and photos, from sources such as the New-York Historical Society and the Library of Congress. The towers of the newly completed Brooklyn Bridge are seen in the distance, on the other side of Manhattan Island. The bridge was the tallest structure in New York at the time. At the far left of the painting is the steeple of St. Paul’s Church. The tall building to the left of the bridge tower is the Western Union Telegraph Building (demolished and replaced by a much taller building.) The spire of Trinity Church, at right, was about 27 stories high, dominating the pre-elevator city. It Young America: New York in the 1890s by Patrick O’Brien was a landmark for mariners entering New oil on canvas • 18x24 inches • $6,000 York Harbor. It is still there, on Broadway at Wall Street, but it can be difficult to see among the much taller more modern buildings. On the far right of the painting is a shot tower, used for making lead shot. It was near the current-day South Street Seaport Museum. On the river, a couple of schooners carry cargo down the river, while a small sidewheel steamboat is on an excursion up the Hudson with vacationers. At left is a monitor-style US Navy ironclad, nearing the end of its useful life, as its design is becoming obsolete. —PO’B SEA HISTORY 166, SPRING 2019 15