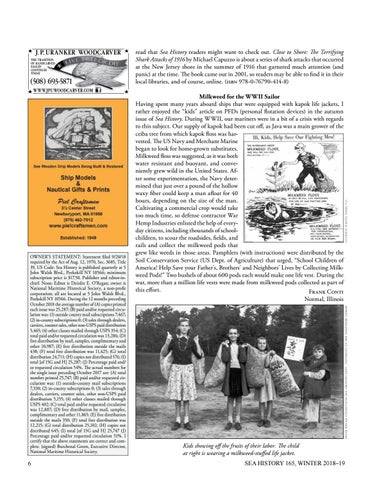 read that Sea History readers might want to check out. Close to Shore: The Terrifying Shark Attacks of 1916 by Michael Capuzzo is about a series of shark attacks that occurred at the New Jersey shore in the summer of 1916 that garnered much attention (and panic) at the time. The book came out in 2001, so readers may be able to find it in their local libraries, and of course, online. (isbn 978-0-76790-414-8) Milkweed for the WWII Sailor Having spent many years aboard ships that were equipped with kapok life jackets, I rather enjoyed the “kids” article on PFDs (personal flotation devices) in the autumn issue of Sea History. During WWII, our mariners were in a bit of a crisis with regards to this subject. Our supply of kapok had been cut off, as Java was a main grower of the ceiba tree from which kapok floss was harvested. The US Navy and Merchant Marine began to look for home-grown substitutes. Milkweed floss was suggested, as it was both water resistant and buoyant, and conveniently grew wild in the United States. After some experimentation, the Navy determined that just over a pound of the hollow waxy fiber could keep a man afloat for 40 hours, depending on the size of the man. Cultivating a commercial crop would take too much time, so defense contractor War Hemp Industries enlisted the help of everyday citizens, including thousands of schoolchildren, to scour the roadsides, fields, and rails and collect the milkweed pods that grew like weeds in those areas. Pamphlets (with instructions) were distributed by the Soil Conservation Service (US Dept. of Agriculture) that urged, “School Children of America! Help Save your Father’s, Brothers’ and Neighbors’ Lives by Collecting Milkweed Pods!” Two bushels of about 600 pods each would make one life vest. During the war, more than a million life vests were made from milkweed pods collected as part of this effort. Frank Conti Normal, Illinois

Kids showing off the fruits of their labor. The child at right is wearing a milkweed-stuffed life jacket. SEA HISTORY 165, WINTER 2018–19