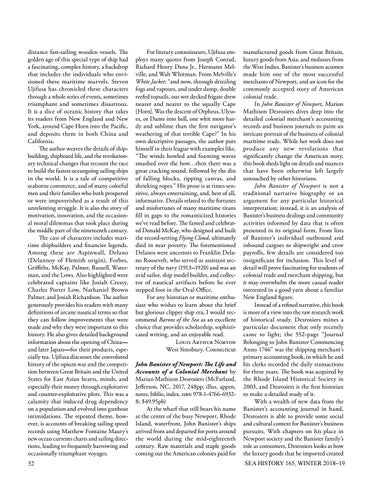 distance fast-sailing wooden vessels. The golden age of this special type of ship had a fascinating, complex history, a backdrop that includes the individuals who envisioned these maritime marvels. Steven Ujifusa has chronicled these characters through a whole series of events, sometimes triumphant and sometimes disastrous. It is a slice of oceanic history that takes its readers from New England and New York, around Cape Horn into the Pacific, and deposits them in both China and California. The author weaves the details of shipbuilding, shipboard life, and the revolutionary technical changes that recount the race to build the fastest oceangoing sailing ships in the world. It is a tale of competitive seaborne commerce, and of many colorful men and their families who both prospered or were impoverished as a result of this unrelenting struggle. It is also the story of motivation, innovation, and the occasional moral dilemmas that took place during the middle part of the nineteenth century. The cast of characters includes maritime shipbuilders and financier legends. Among these are Aspinwall, Delano (Delannoy of Flemish origin), Forbes, Griffiths, McKay, Palmer, Russell, Waterman, and the Lows. Also highlighted were celebrated captains like Josiah Cressy, Charles Porter Low, Nathaniel Brown Palmer, and Josiah Richardson. The author generously provides his readers with many definitions of arcane nautical terms so that they can follow improvements that were made and why they were important to this history. He also gives detailed background information about the opening of China— and later Japan—for their products, especially tea. Ujifusa discusses the convoluted history of the opium war and the competition between Great Britain and the United States for East Asian hearts, minds, and especially their money through exploitative and counter-exploitative plots. This was a calamity that induced drug dependency on a population and evolved into gunboat intimidations. The repeated theme, however, is accounts of breaking sailing speed records using Matthew Fontaine Maury’s new ocean currents charts and sailing directions, leading to frequently harrowing and occasionally triumphant voyages. 52

For literary connoisseurs, Ujifusa employs many quotes from Joseph Conrad, Richard Henry Dana Jr., Hermann Melville, and Walt Whitman. From Melville’s White Jacket: “and now, through drizzling fogs and vapours, and under damp, double reefed topsails, our wet decked frigate drew nearer and nearer to the squally Cape [Horn]. Was the descent of Orpheus, Ulysses, or Dante into hell, one whit more hardy and sublime than the first navigator’s weathering of that terrible Cape?” In his own descriptive passages, the author puts himself in their league with examples like, “The winds howled and foaming waves smashed over the bow…then there was a great cracking sound, followed by the din of falling blocks, ripping canvas, and shrieking ropes.” His prose is at times sensitive, always entertaining, and, best of all, informative. Details related to the fortunes and misfortunes of many maritime titans fill in gaps to the romanticized histories we’ve read before. The famed and celebrated Donald McKay, who designed and built the record-setting Flying Cloud, ultimately died in near poverty. The forementioned Delanos were ancestors to Franklin Delano Roosevelt, who served as assistant secretary of the navy (1913–1920) and was an avid sailor, ship model builder, and collector of nautical artifacts before he ever stepped foot in the Oval Office. For any historian or maritime enthusiast who wishes to learn about the brief but glorious clipper ship era, I would recommend Barons of the Sea as an excellent choice that provides scholarship, sophisticated writing, and an enjoyable read. Louis Arthur Norton West Simsbury, Connecticut John Banister of Newport: The Life and Accounts of a Colonial Merchant by Marian Mathison Desrosiers (McFarland, Jefferson, NC, 2017, 248pp, illus, appen, notes, biblio, index, isbn 978-1-4766-69328; $49.95pb) At the wharf that still bears his name at the center of the busy Newport, Rhode Island, waterfront, John Banister’s ships arrived from and departed for ports around the world during the mid-eighteenth century. Raw materials and staple goods coming out the American colonies paid for

manufactured goods from Great Britain, luxury goods from Asia, and molasses from the West Indies. Banister’s business acumen made him one of the most successful merchants of Newport, and an icon for the commonly accepted story of American colonial trade. In John Banister of Newport, Marion Mathison Desrosiers dives deep into the detailed colonial merchant’s accounting records and business journals to paint an intricate portrait of the business of colonial maritime trade. While her work does not produce any new revelations that significantly change the American story, this book sheds light on details and nuances that have been otherwise left largely untouched by other historians. John Banister of Newport is not a traditional narrative biography or an argument for any particular historical interpretation; instead, it is an analysis of Banister’s business dealings and community activities informed by data that is often presented in its original form. From lists of Banister’s individual outbound and inbound cargoes to shipwright and crew payrolls, few details are considered too insignificant for inclusion. This level of detail will prove fascinating for students of colonial trade and merchant shipping, but it may overwhelm the more casual reader interested in a good yarn about a familiar New England figure. Instead of a refined narrative, this book is more of a view into the raw research work of historical study. Desrosiers mines a particular document that only recently came to light; the 552-page “Journal Belonging to John Banister Commencing Anno 1746” was the shipping merchant’s primary accounting book, in which he and his clerks recorded the daily transactions for three years. The book was acquired by the Rhode Island Historical Society in 2003, and Desrosiers is the first historian to make a detailed study of it. With a wealth of new data from the Banister’s accounting journal in hand, Desrosiers is able to provide some social and cultural context for Banister’s business pursuits. With chapters on his place in Newport society and the Banister family’s role as consumers, Desrosiers looks at how the luxury goods that he imported created SEA HISTORY 165, WINTER 2018–19