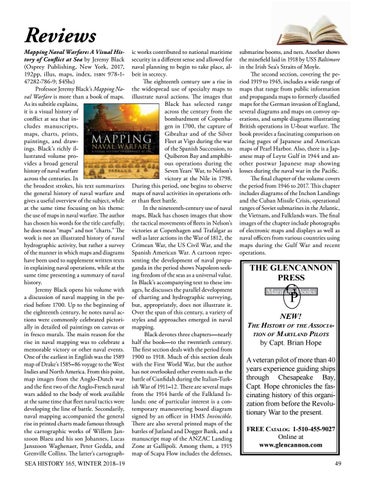 Mapping Naval Warfare: A Visual History of Conflict at Sea by Jeremy Black (Osprey Publishing, New York, 2017, 192pp, illus, maps, index, isbn 978-147282-786-9; $45hc) Professor Jeremy Black’s Mapping Naval Warfare is more than a book of maps. As its subtitle explains, it is a visual history of conflict at sea that includes manuscripts, maps, charts, prints, paintings, and drawings. Black’s richly illustrated volume provides a broad general history of naval warfare across the centuries. In the broadest strokes, his text summarizes the general history of naval warfare and gives a useful overview of the subject, while at the same time focusing on his theme: the use of maps in naval warfare. The author has chosen his words for the title carefully; he does mean “maps” and not “charts.” The work is not an illustrated history of naval hydrographic activity, but rather a survey of the manner in which maps and diagrams have been used to supplement written texts in explaining naval operations, while at the same time presenting a summary of naval history. Jeremy Black opens his volume with a discussion of naval mapping in the period before 1700. Up to the beginning of the eighteenth century, he notes naval actions were commonly celebrated pictorially in detailed oil paintings on canvas or in fresco murals. The main reason for the rise in naval mapping was to celebrate a memorable victory or other naval events. One of the earliest in English was the 1589 map of Drake’s 1585–86 voyage to the West Indies and North America. From this point, map images from the Anglo-Dutch war and the first two of the Anglo-French naval wars added to the body of work available at the same time that fleet naval tactics were developing the line of battle. Secondarily, naval mapping accompanied the general rise in printed charts made famous through the cartographic works of Willem Janszoon Blaeu and his son Johannes, Lucas Janszoon Waghenaer, Peter Gedda, and Grenville Collins. The latter’s cartograph-

ic works contributed to national maritime submarine booms, and nets. Another shows security in a different sense and allowed for the minefield laid in 1918 by USS Baltimore naval planning to begin to take place, al- in the Irish Sea’s Straits of Moyle. beit in secrecy. The second section, covering the peThe eighteenth century saw a rise in riod 1919 to 1945, includes a wide range of the widespread use of specialty maps to maps that range from public information illustrate naval actions. The images that and propaganda maps to formerly classified Black has selected range maps for the German invasion of England, across the century from the several diagrams and maps on convoy opbombardment of Copenha- erations, and sample diagrams illustrating gen in 1700, the capture of British operations in U-boat warfare. The Gibraltar and of the Silver book provides a fascinating comparison on Fleet at Vigo during the war facing pages of Japanese and American of the Spanish Succession, to maps of Pearl Harbor. Also, there is a JapQuiberon Bay and amphibi- anese map of Leyte Gulf in 1944 and anous operations during the other postwar Japanese map showing Seven Years’ War, to Nelson’s losses during the naval war in the Pacific. victory at the Nile in 1798. The final chapter of the volume covers During this period, one begins to observe the period from 1946 to 2017. This chapter The Glencannon Press maps of naval activities in operations oth- includes diagrams of the Inchon Landings 4 col. inches (2.25 x 4.5 er than fleet battle. andinches) the Cuban Missile Crisis, operational Prefer rightusehand page,ranges bottom right. In the nineteenth-century of naval of Soviet submarines in the Atlantic, maps, Black has chosen images that show the Vietnam, and Falklands wars. The final the tactical movements of fleets in Nelson’s images of the chapter include photographs victories at Copenhagen and Trafalgar as of electronic maps and displays as well as well as later actions in the War of 1812, the naval officers from various countries using Crimean War, the US Civil War, and the maps during the Gulf War and recent Spanish American War. A cartoon repre- operations. senting the development of naval propaganda in the period shows Napoleon seekTHE GLENCANNON ing freedom of the seas as a universal value. PRESS In Black’s accompanying text to these images, he discusses the parallel development Maritime Books of charting and hydrographic surveying, but, appropriately, does not illustrate it. Over the span of this century, a variety of NEW! styles and approaches emerged in naval The hisTory of The AssociAmapping. Tion of MArylAnd PiloTs Black devotes three chapters—nearly half the book—to the twentieth century. by Capt. Brian Hope The first section deals with the period from 1900 to 1918. Much of this section deals A veteran pilot of more than 40 with the First World War, but the author years experience guiding ships has not overlooked other events such as the through Chesapeake Bay, battle of Cunfidah during the Italian-TurkCapt. Hope chronicles the fasish War of 1911–12. There are several maps from the 1914 battle of the Falkland Iscinating history of this organilands; one of particular interest is a conzation from before the Revolutemporary maneuvering board diagram tionary War to the present. signed by an officer in HMS Invincible. There are also several printed maps of the FREE Catalog 1-510-455-9027 battles of Jutland and Dogger Bank, and a Online at manuscript map of the ANZAC Landing www.glencannon.com Zone at Gallipoli. Among them, a 1915 map of Scapa Flow includes the defenses,