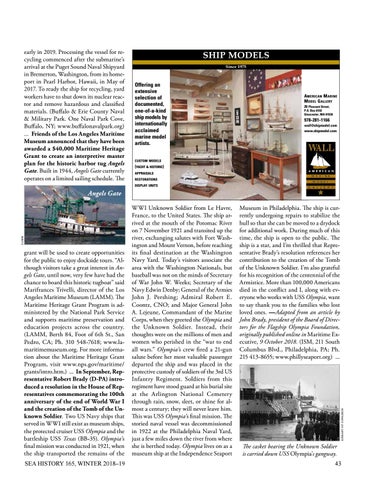 early in 2019. Processing the vessel for recycling commenced after the submarine’s arrival at the Puget Sound Naval Shipyard in Bremerton, Washington, from its homeport in Pearl Harbor, Hawaii, in May of 2017. To ready the ship for recycling, yard workers have to shut down its nuclear reactor and remove hazardous and classified materials. (Buffalo &amp; Erie County Naval &amp; Military Park. One Naval Park Cove, Buffalo, NY; www.buffalonavalpark.org) ... Friends of the Los Angeles Maritime Museum announced that they have been awarded a $40,000 Maritime Heritage Grant to create an interpretive master plan for the historic harbor tug Angels Gate. Built in 1944, Angels Gate currently operates on a limited sailing schedule. The

grant will be used to create opportunities for the public to enjoy dockside tours. “Although visitors take a great interest in Angels Gate, until now, very few have had the chance to board this historic tugboat” said Marifrances Trivelli, director of the Los Angeles Maritime Museum (LAMM). The Maritime Heritage Grant Program is administered by the National Park Service and supports maritime preservation and education projects across the country. (LAMM, Berth 84, Foot of 6th St., San Pedro, CA; Ph. 310 548-7618; www.lamaritimemuseum.org. For more information about the Maritime Heritage Grant Program, visit www.nps.gov/maritime/ grants/intro.htm.) ... In September, Representative Robert Brady (D-PA) introduced a resolution in the House of Representatives commemorating the 100th anniversary of the end of World War I and the creation of the Tomb of the Unknown Soldier. Two US Navy ships that served in WWI still exist as museum ships, the protected cruiser USS Olympia and the battleship USS Texas (BB-35). Olympia’s final mission was conducted in 1921, when the ship transported the remains of the

WWI Unknown Soldier from Le Havre, France, to the United States. The ship arrived at the mouth of the Potomac River on 7 November 1921 and transited up the river, exchanging salutes with Fort Washington and Mount Vernon, before reaching its final destination at the Washington Navy Yard. Today’s visitors associate the area with the Washington Nationals, but baseball was not on the minds of Secretary of War John W. Weeks; Secretary of the Navy Edwin Denby; General of the Armies John J. Pershing; Admiral Robert E. Coontz, CNO; and Major General John A. Lejeune, Commandant of the Marine Corps, when they greeted the Olympia and the Unknown Soldier. Instead, their thoughts were on the millions of men and women who perished in the “war to end all wars.” Olympia’s crew fired a 21-gun salute before her most valuable passenger departed the ship and was placed in the protective custody of soldiers of the 3rd US Infantry Regiment. Soldiers from this regiment have stood guard at his burial site at the Arlington National Cemetery through rain, snow, sleet, or shine for almost a century; they will never leave him. This was USS Olympia’s final mission. The storied naval vessel was decommissioned in 1922 at the Philadelphia Naval Yard, just a few miles down the river from where she is berthed today. Olympia lives on as a museum ship at the Independence Seaport

Museum in Philadelphia. The ship is currently undergoing repairs to stabilize the hull so that she can be moved to a drydock for additional work. During much of this time, the ship is open to the public. The ship is a star, and I’m thrilled that Representative Brady’s resolution references her contribution to the creation of the Tomb of the Unknown Soldier. I’m also grateful for his recognition of the centennial of the Armistice. More than 100,000 Americans died in the conflict and I, along with everyone who works with USS Olympia, want to say thank you to the families who lost loved ones. —Adapted from an article by John Brady, president of the Board of Directors for the Flagship Olympia Foundation, originally published online in Maritime Executive, 9 October 2018. (ISM, 211 South Columbus Blvd., Philadelphia, PA; Ph. 215 413-8655; www.phillyseaport.org) ...

The casket bearing the Unknown Soldier is carried down USS Olympia’s gangway.