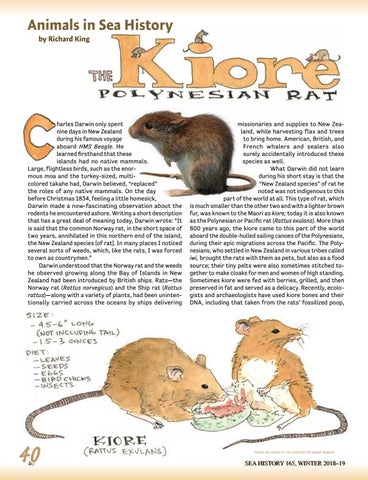 harles Darwin only spent nine days in New Zealand during his famous voyage aboard HMS Beagle. He learned firsthand that these islands had no native mammals. Large, flightless birds, such as the enormous moa and the turkey-sized, multicolored takahe had, Darwin believed, “replaced” the roles of any native mammals. On the day before Christmas 1834, feeling a little homesick, Darwin made a now-fascinating observation about the rodents he encountered ashore. Writing a short description that has a great deal of meaning today, Darwin wrote: “It is said that the common Norway rat, in the short space of two years, annihilated in this northern end of the island, the New Zealand species [of rat]. In many places I noticed several sorts of weeds, which, like the rats, I was forced to own as countrymen.” Darwin understood that the Norway rat and the weeds he observed growing along the Bay of Islands in New Zealand had been introduced by British ships. Rats—the Norway rat (Rattus norvegicus) and the Ship rat (Rattus rattus)—along with a variety of plants, had been unintentionally carried across the oceans by ships delivering

missionaries and supplies to New Zealand, while harvesting flax and trees to bring home. American, British, and French whalers and sealers also surely accidentally introduced these species as well. What Darwin did not learn during his short stay is that the “New Zealand species” of rat he noted was not indigenous to this part of the world at all. This type of rat, which is much smaller than the other two and with a lighter brown fur, was known to the Maori as kiore; today it is also known as the Polynesian or Pacific rat (Rattus exulans). More than 800 years ago, the kiore came to this part of the world aboard the double-hulled sailing canoes of the Polynesians, during their epic migrations across the Pacific. The Polynesians, who settled in New Zealand in various tribes called iwi, brought the rats with them as pets, but also as a food source; their tiny pelts were also sometimes stitched together to make cloaks for men and women of high standing. Sometimes kiore were fed with berries, grilled, and then preserved in fat and served as a delicacy. Recently, ecologists and archaeologists have used kiore bones and their DNA, including that taken from the rats’ fossilized poop,