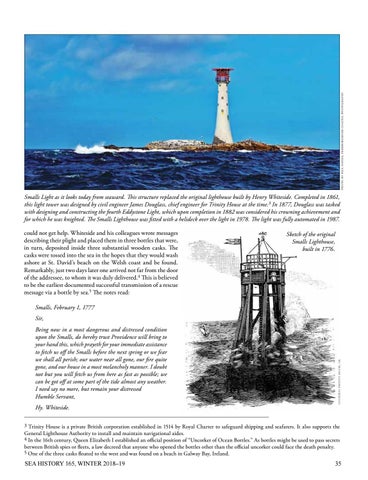 Smalls Light as it looks today from seaward. This structure replaced the original lighthouse built by Henry Whiteside. Completed in 1861, this light tower was designed by civil engineer James Douglass, chief engineer for Trinity House at the time.3 In 1877, Douglass was tasked with designing and constructing the fourth Eddystone Light, which upon completion in 1882 was considered his crowning achievement and for which he was knighted. The Smalls Lighthouse was fitted with a helideck over the light in 1978. The light was fully automated in 1987. could not get help. Whiteside and his colleagues wrote messages describing their plight and placed them in three bottles that were, in turn, deposited inside three substantial wooden casks. The casks were tossed into the sea in the hopes that they would wash ashore at St. David’s beach on the Welsh coast and be found. Remarkably, just two days later one arrived not far from the door of the addressee, to whom it was duly delivered.4 This is believed to be the earliest documented successful transmission of a rescue message via a bottle by sea.5 The notes read:

Sketch of the original Smalls Lighthouse, built in 1776.

Smalls, February 1, 1777 Being now in a most dangerous and distressed condition upon the Smalls, do hereby trust Providence will bring to your hand this, which prayeth for your immediate assistance to fetch us off the Smalls before the next spring or we fear we shall all perish; our water near all gone, our fire quite gone, and our house in a most melancholy manner. I doubt not but you will fetch us from here as fast as possible; we can be got off at some part of the tide almost any weather. I need say no more, but remain your distressed Humble Servant, Hy. Whiteside.

3 Trinity House is a private British corporation established in 1514 by Royal Charter to safeguard shipping and seafarers. It also supports the

4 In the 16th century, Queen Elizabeth I established an official position of “Uncorker of Ocean Bottles.” As bottles might be used to pass secrets

between British spies or fleets, a law decreed that anyone who opened the bottles other than the official uncorker could face the death penalty. 5 One of the three casks floated to the west and was found on a beach in Galway Bay, Ireland.