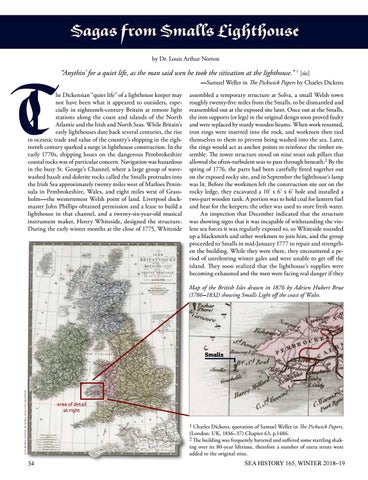 “Anythin’ for a quiet life, as the man said wen he took the sitivation at the lighthouse.” 1 [sic] —Samuel Weller in The Pickwick Papers by Charles Dickens

he Dickensian “quiet life” of a lighthouse keeper may not have been what it appeared to outsiders, especially in eighteenth-century Britain at remote light stations along the coast and islands of the North Atlantic and the Irish and North Seas. While Britain’s early lighthouses date back several centuries, the rise in oceanic trade and value of the country’s shipping in the eighteenth century sparked a surge in lighthouse construction. In the early 1770s, shipping losses on the dangerous Pembrokeshire coastal rocks was of particular concern. Navigation was hazardous in the busy St. George’s Channel, where a large group of wavewashed basalt and dolerite rocks called the Smalls protrudes into the Irish Sea approximately twenty miles west of Marloes Peninsula in Pembrokeshire, Wales, and eight miles west of Grassholm—the westernmost Welsh point of land. Liverpool dockmaster John Phillips obtained permission and a lease to build a lighthouse in that channel, and a twenty-six-year-old musical instrument maker, Henry Whiteside, designed the structure. During the early winter months at the close of 1775, Whiteside

assembled a temporary structure at Solva, a small Welsh town roughly twenty-five miles from the Smalls, to be dismantled and reassembled out at the exposed site later. Once out at the Smalls, the iron supports (or legs) in the original design soon proved faulty and were replaced by sturdy wooden beams. When work resumed, iron rings were inserted into the rock, and workmen then tied themselves to them to prevent being washed into the sea. Later, the rings would act as anchor points to reinforce the timber ensemble. The tower structure stood on nine stout oak pillars that allowed the often-turbulent seas to pass through beneath.2 By the spring of 1776, the parts had been carefully fitted together out on the exposed rocky site, and in September the lighthouse’s lamp was lit. Before the workmen left the construction site out on the rocky ledge, they excavated a 10’ x 6’ x 6’ hole and installed a two-part wooden tank. A portion was to hold coal for lantern fuel and heat for the keepers; the other was used to store fresh water. An inspection that December indicated that the structure was showing signs that it was incapable of withstanding the violent sea forces it was regularly exposed to, so Whiteside rounded up a blacksmith and other workmen to join him, and the group proceeded to Smalls in mid-January 1777 to repair and strengthen the building. While they were there, they encountered a period of unrelenting winter gales and were unable to get off the island. They soon realized that the lighthouse’s supplies were becoming exhausted and the men were facing real danger if they Map of the British Isles drawn in 1876 by Adrien Hubert Brue (1786–1832) showing Smalls Light off the coast of Wales.

area of detail at right 1 Charles Dickens, quotation of Samuel Weller in The Pickwick Papers,

2 The building was frequently battered and suffered some startling shak-

ing over its 80-year lifetime, therefore a number of extra struts were added to the original nine.