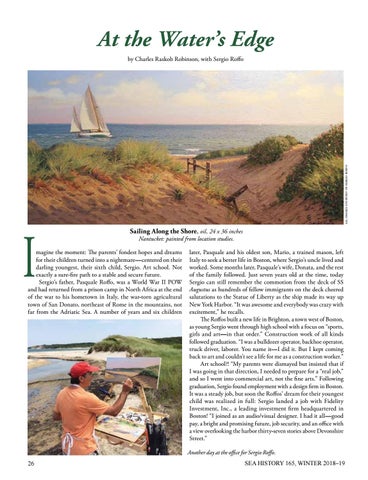 At the Water’s Edge

all images courtesy of sergio roffo

magine the moment: The parents’ fondest hopes and dreams for their children turned into a nightmare—centered on their darling youngest, their sixth child, Sergio. Art school. Not exactly a sure-fire path to a stable and secure future. Sergio’s father, Pasquale Roffo, was a World War II POW and had returned from a prison camp in North Africa at the end of the war to his hometown in Italy, the war-torn agricultural town of San Donato, northeast of Rome in the mountains, not far from the Adriatic Sea. A number of years and six children

later, Pasquale and his oldest son, Mario, a trained mason, left Italy to seek a better life in Boston, where Sergio’s uncle lived and worked. Some months later, Pasquale’s wife, Donata, and the rest of the family followed. Just seven years old at the time, today Sergio can still remember the commotion from the deck of SS Augustus as hundreds of fellow immigrants on the deck cheered salutations to the Statue of Liberty as the ship made its way up New York Harbor. “It was awesome and everybody was crazy with excitement,” he recalls. The Roffos built a new life in Brighton, a town west of Boston, as young Sergio went through high school with a focus on “sports, girls and art—in that order.” Construction work of all kinds followed graduation. “I was a bulldozer operator, backhoe operator, truck driver, laborer. You name it—I did it. But I kept coming back to art and couldn’t see a life for me as a construction worker.” Art school?! “My parents were dismayed but insisted that if I was going in that direction, I needed to prepare for a “real job,” and so I went into commercial art, not the fine arts.” Following graduation, Sergio found employment with a design firm in Boston. It was a steady job, but soon the Roffos’ dream for their youngest child was realized in full: Sergio landed a job with Fidelity Investment, Inc., a leading investment firm headquartered in Boston! “I joined as an audio/visual designer. I had it all—good pay, a bright and promising future, job security, and an office with a view overlooking the harbor thirty-seven stories above Devonshire Street.” Another day at the office for Sergio Roffo.