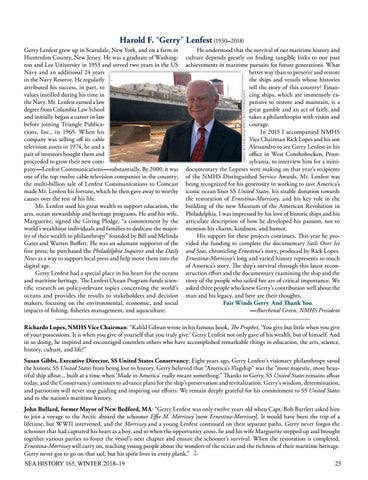 Harold F. “Gerry” Lenfest (1930–2018) He understood that the survival of our maritime history and culture depends greatly on finding tangible links to our past achievements in maritime pursuits for future generations. What better way than to preserve and restore the ships and vessels whose histories tell the story of this country? Financing ships, which are immensely expensive to restore and maintain, is a great gamble and an act of faith, and takes a philanthropist with vision and courage. In 2015 I accompanied NMHS Vice Chairman Rick Lopes and his son Alessandro to see Gerry Lenfest in his office in West Conshohocken, Pennsylvania, to interview him for a minidocumentary the Lopeses were making on that year’s recipients of the NMHS Distinguished Service Awards. Mr. Lenfest was being recognized for his generosity in working to save America’s iconic ocean liner SS United States, his sizable donation towards the restoration of Ernestina-Morrissey, and his key role in the building of the new Museum of the American Revolution in Philadelphia. I was impressed by his love of historic ships and his articulate description of how he developed his passion, not to mention his charm, kindness, and humor. His support for these projects continues. This year he provided the funding to complete the documentary Sails Over Ice and Seas, chronicling Ernestina’s story, produced by Rick Lopes. Ernestina-Morrissey’s long and varied history represents so much of America’s story. The ship’s survival through this latest reconstruction effort and the documentary examining the ship and the story of the people who sailed her are of critical importance. We asked three people who knew Gerry’s contribution well about the man and his legacy, and here are their thoughts. Fair Winds Gerry. And Thank You. —Burchenal Green, NMHS President photo by patrick murphy, ssus conservancy

Gerry Lenfest grew up in Scarsdale, New York, and on a farm in Hunterdon County, New Jersey. He was a graduate of Washington and Lee University in 1953 and served two years in the US Navy and an additional 24 years in the Navy Reserve. He regularly attributed his success, in part, to values instilled during his time in the Navy. Mr. Lenfest earned a law degree from Columbia Law School and initially began a career in law before joining Triangle Publications, Inc., in 1965. When his company was selling off its cable television assets in 1974, he and a pair of investors bought them and proceeded to grow their new company—Lenfest Communications—substantially. By 2000, it was one of the top twelve cable television companies in the country; the multi-billion sale of Lenfest Communications to Comcast made Mr. Lenfest his fortune, which he then gave away to worthy causes over the rest of his life. Mr. Lenfest used his great wealth to support education, the arts, ocean stewardship and heritage programs. He and his wife, Marguerite, signed the Giving Pledge, “a commitment by the world’s wealthiest individuals and families to dedicate the majority of their wealth to philanthropy” founded by Bill and Melinda Gates and Warren Buffett. He was an adamant supporter of the free press; he purchased the Philadelphia Inquirer and the Daily News as a way to support local press and help move them into the digital age. Gerry Lenfest had a special place in his heart for the oceans and maritime heritage. The Lenfest Ocean Program funds scientific research on policy-relevant topics concerning the world’s oceans and provides the results to stakeholders and decision makers, focusing on the environmental, economic, and social impacts of fishing, fisheries management, and aquaculture.

Richardo Lopes, NMHS Vice Chairman: “Kahlil Gibran wrote in his famous book, The Prophet, ‘You give but little when you give of your possessions. It is when you give of yourself that you truly give.’ Gerry Lenfest not only gave of his wealth, but of himself. And in so doing, he inspired and encouraged countless others who have accomplished remarkable things in education, the arts, science, history, culture, and life!” Susan Gibbs, Executive Director, SS United States Conservancy: Eight years ago, Gerry Lenfest’s visionary philanthropy saved the historic SS United States from being lost to history. Gerry believed that “America’s Flagship” was the “most majestic, most beautiful ship afloat... built at a time when ‘Made in America’ really meant something.” Thanks to Gerry, SS United States remains afloat today, and the Conservancy continues to advance plans for the ship’s preservation and revitalization. Gerry’s wisdom, determination, and patriotism will never stop guiding and inspiring our efforts. We remain deeply grateful for his commitment to SS United States and to the nation’s maritime history. John Bullard, former Mayor of New Bedford, MA: “Gerry Lenfest was only twelve years old when Capt. Bob Bartlett asked him to join a voyage to the Arctic aboard the schooner Effie M. Morrissey [now Ernestina-Morrissey]. It would have been the trip of a lifetime, but WWII intervened, and the Morrissey and a young Lenfest continued on their separate paths. Gerry never forgot the schooner that had captured his heart as a boy, and so when the opportunity arose, he and his wife Marguerite stepped up and brought together various parties to foster the vessel’s next chapter and ensure the schooner’s survival. When the restoration is completed, Ernestina-Morrissey will carry on, teaching young people about the wonders of the ocean and the richness of their maritime heritage. Gerry never got to go on that sail, but his spirit lives in every plank.” SEA HISTORY 165, WINTER 2018–19 25